The new summer promotion begins tonight at Disneyland. Sadly, we were unable to go this evening due to needing to be somewhere else. HOWEVER, last night there was a special preview of the new fireworks, Magical!! We rearranged where we were supposed to be last night and went to Disneyland.

It's kinda something we've done the past few new firework shows that Disneyland has premiered. We go the first night and sit for hours for a good spot. It's like our little tradition.

Steven's vacation hours are stacking up and he's at the point where if he doesn't start taking time off, he stops accruing any more. So he actually took yesterday off from work, used the morning to work on a church project, and then be available to go to Disneyland as soon as Hannah was out of school. 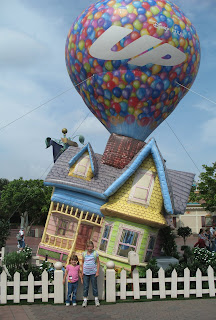 It was such a nice afternoon. It's been a very long time since just the four of us has spent any time together at Disneyland and we had fun getting on some rides as a family. Our girls are both at heights where they can get on the good rides, but don't. Someday we'll have even more fun as a family going on rides. LOL. 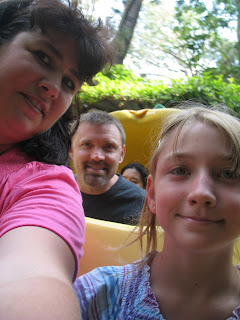 A little birdie had told me that my Aunt and Grandmother would be strolling about Disneyland as it was my Aunt's birthday. I had told both the girls to be on the lookout for Great Grandma. I never ever thought we'd actually run into them on this crowded June day, as large as Disneyland is. But we did! We hung out together for a while. And then we went to steak out our spot in front of the castle for the fireworks and they went walking to a portion of the park they'd not been yet. They met back up with us and enjoyed our awesome spot for the fireworks. 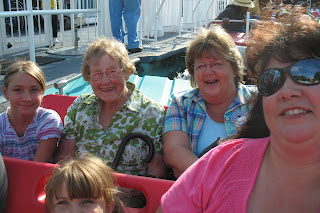 On to the new fireworks show. Any fireworks show that Disneyland puts on is good. This one was no exception, it was good. But to be perfectly honest, I think the Remember fireworks show from the 50th anniversary were tons better. The theming and effects and colors and music of that show was simply amazing. This new fireworks show...it was okay, but nothing compared to that of Remember. The one thing that was extraordinary about this show and aside from seeing Tinkerbell once again fly over the castle, my favorite part was the premiere of Dumbo flying over the castle. THAT was awesome! 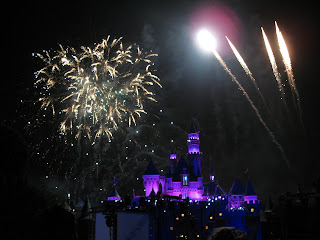 If you won't be making a trip to The Happiest Place on Earth this summer, or can't wait to see the fireworks, here's a video. I didn't take it, so the annoying voices surrounding the camera don't belong to anyone in our party. LOL. ENJOY!
at June 12, 2009

What fun to spend the day with your family at the Happiest Place on Earth. I love Disney's shows they all seem to be magical and give me goosebumps.