Today, I accompanied the entire 5th grade from our school on what is the last field trip whereas parents will be allowed to join their kids. My last field trip with Hannah. In 6th grade, they attend Science Camp for four days, where no parents are allowed, no calls home, etc. In Junior HIgh, it'll be Catalina over a weekend for Science, again no parents either, so I've heard. So after all these years of being able to go on field trips with Hannah, today was my last. 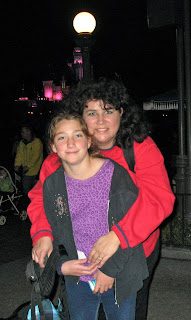 I've been blessed to be a Stay at Home Mom all these years that has allowed me to be a part of Hannah's school trips and functions. I'm thankful for this time. And I'm thankful for a hard working husband that provides enough for his family that I can stay home.
at February 24, 2011 No comments:

Book Signing with The Pioneer Woman

Early in January, Ree Drummond, aka The Pioneer Woman, posted on her Facebook status that she'd be making a Los Angeles stop on her current book tour promoting her new book, Black Heels to Tractor Wheels, a book based on her moving from Los Angeles, falling in love with a cowboy she'd met in a bar, and their romance story of dating and ultimate marriage, and her moving to a farm out in the middle of Oklahoma. 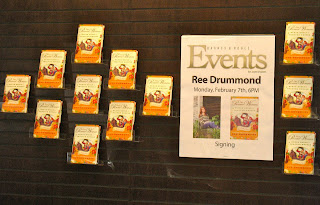 As the day of her Los Angeles appointment drew close, I decided I'd just skip going. The book store was giving out wrist bands starting that morning at 9:30 and surely they'd all be given out by the time I could make it there later in the afternoon. So I decided to skip it.

The day of the book signing, as I sat in the car, waiting for the school bell to ring, my sister-in-law, Grace texted, asking if I was going to see PW. We decided that we'd chance it, we'd make the drive in to Los Angeles and see if we could meet Ree Drummond, aka The Pioneer Woman, aka PW. We'd both been fans for years. Following her blog, making her recipes.

Within 30 minutes, we met up and were on the road to L.A. Talk about spontaneous!

We arrived to the bookstore to discover we'd missed wrist bands by half an hour, but it was okay, PW had agreed to stay until every book was signed, every fan had been greeted. We bought our books and eventually made our way into a stand by line. 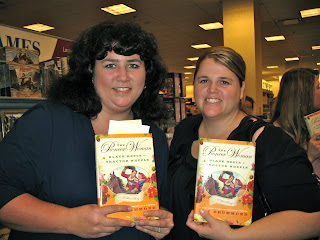 After standing in line for over 3 hours, we got to meet a woman whom we'd grown to know and love through the internet. She was exactly how she came across on her blog, just as we'd seen on TV segments, she was friendly, funny, and knew approximately how far we'd traveled when we told her where we were from. LOL. 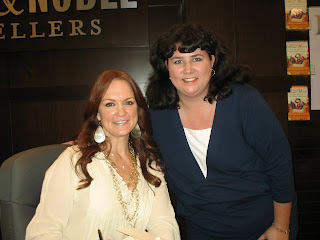 I'm glad we decided to go. It was nice to hang out with my sister in law for such a long time, having uninterrupted conversations without our girls around. LOL. Now I look forward to reading my new book!
at February 20, 2011 No comments:

I can hardly believe it's almost been a month since I posted anything here on my blog. It sure hasn't been for a lack of anything to post about, because life has been crazy busy.

It's raining this morning, and I'm almost caught up on laundry (not that either of those have anything to do with one another) but I have a few minutes to sit and write a quick blog post before heading to pick up the girls from school (Wednesdays are minimum days) and then this afternoon, Rachel has speech.

All is good. Just been busy. Crazy busy. But I do have a lot of things to write about - including a new home for our church, meeting Pioneer Woman!!, and lots of other little things!
at February 16, 2011 No comments: