It's been a very long time since I've updated this blog, or any of my three blogs for that matter. I've missed writing, I've missed keeping a journal of what life has held for me, for our family.

It's been well over six months since I've last updated and so much has happened in that time. I have been putting off blogging until I could go back and write 'catch up' posts from everything our life has held for us since my last posting in January. But I've come to the conclusion, that if I want get back into blogging, I need to just start afresh and not try to go back and write posts from the past. However, I will highlight some of the big things of the last 8+ months.

My position at school kept me very busy. In addition to my duties as PTA President, I was the chairperson for Teacher Appreciation Week, headed up the Year Long Perfect Attendance Lunch with the Principal, and many, many other little things that definitely kept me busy. As for this current school year, I am once again PTA President, but know the role better this year and have learned to really delegate and not overextend myself. I'll be honest and say I've lost some of my steam as two of my closet PTA girlfriends have "abandoned me". LOL. One left the school completely, and the other was just fed up with all the drama and isn't a part of PTA at all, I don't blame her one bit.

The beginning of May found Steven scheduled to go to Maryland for a week on business. The company in which he is employed with, is located in Maryland. This company bought out the old company last October and have expressed interest in him coming out once or twice a year. May was his second time in going out. There's been several times through the years that he's been scheduled for business trips and he always suggests finding a way to have me join him, etc. But it's just never worked out due to finances, the girls ages, their school schedules, and just life in general. But this time, it was looking like I'd be able to join him! And I was beyond excited!

He flew out early Monday morning and I would join him Thursday and together we'd spend the weekend touring Washington DC!! I flew out Wednesday night and took a red eye flight, my air travel coming to an end around 9:00 Thursday morning! I picked up my rental car and found my way to the hotel in which Steven had been staying. I had all of Thursday to relax, nap, and unwind from what had been an extremely busy few weeks, while he worked his normal work day.

On Friday, I met a dear, dear girlfriend for lunch. She lived a little over an hour and a half from where we were and there was no way either of us was going to miss the opportunity to see each other. We met for lunch and spent hours talking. That evening when Steven was done working we made our way to our hotel in downtown Washington DC. We had booked a room on Priceline.com that landed us just two blocks from the White House! We dropped our bags in our room and set off to see the first thing on my list...The White House! 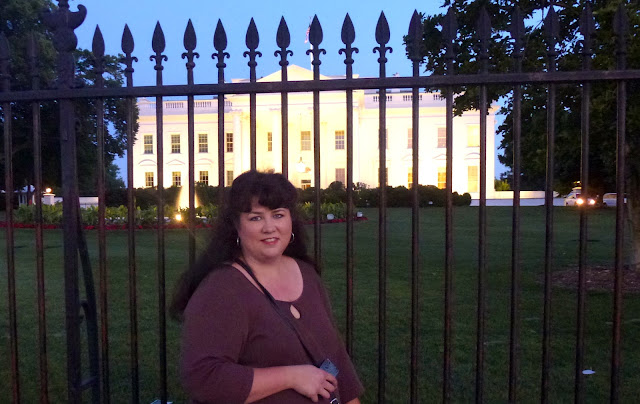 There are no words to express the emotions of seeing something you've always seen in pictures, on the TV, heard about. I was truly in awe, and couldn't believe I was actually in Washington DC!!

Saturday morning we hit the ground running. We spent the next 12 hours INTENSELY sight seeing!! You name it, we probably saw it. We packed days of sightseeing into that day, as well as the few hours on Sunday morning we had before flying home. 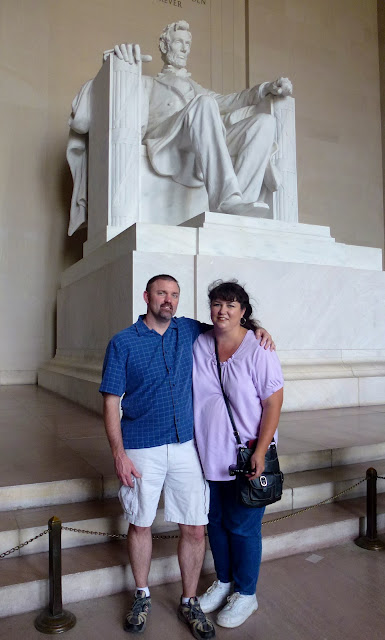 We flew home Sunday afternoon (Mother's Day). I am so incredibly thankful for the opportunity to have had this trip. The girls stayed with my parents, and I had a girlfriend pick up the girls from school along with her daughter and drop them off at my parents house the two days they had school while I was gone.

To see our Nations history left me speechless. Seeing the White House and the Lincoln Memorial brought tears to my eyes. And all I can think of is I cannot wait to go back! There is still so much more to see of our Nation's history. I loved traveling, I'd never flown by myself but enjoyed it, and I LOVED the red eye experience and having an entire extra day on that end. I can't say enough great things about those four very full days. I will say that within weeks of getting home, we'd opened up a credit card that gives you points that can be applied towards traveling - hotel, airfare, etc, and I've started using it EVERYWHERE I can to earn more points! THAT's how much I wand to go back. And in my mind, it's not a matter of "if", it's "when", because as long as Steven works for this particular company, there's always the chance he'll be going back!

Once the girls finished the school year, we had 8 1/2 weeks of summer break and we tried to make the most of it! We took day trips to the beach with friends, went to Hollywood, to the movies, and so much more! Including a week long of VBS where Steven and I were both very much involved.

We also spent a week camping at our favorite beach campground! Normally a large group of people from church go, but no one got reservations this year, which meant, there'd be no kids there to entertain our kids. But I had the bright idea of taking our nieces with us for the week and that worked out wonderfully! The four girls had a tent to themselves and got along all week and had a blast....all the while making memories!! It was a great way to end our summer break, as Rachel started school the very next week!

The school year started with a bang....Rachel fell and hit her head and sustained a concussion and couldn't go the first day of school! But she went the second day. Hannah started Jr High a week later, which gave her and I some mother/daughter days....shopping, shopping with a friend and her daughter, lunch, etc. And then once she started school....my taxi services started right back up, however, now I go to two different schools. I think I'm finally used to it, however, it's the afternoon pick up time that's starting to really wear me down. Rachel gets out of school at 1:55 and Hannah at 3:00. There's no since in coming home for such a short time, so Rachel and I have to find things to do in that hour between schools letting out. I created a homework basket that is stocked with everything needed for doing homework (pencils, crayons, scissors, gluestick, etc) and we've gone to the library, gone to my parents house to visit Gramma, we've run errands, and this week, with the temperatures cooling down a bit, we've been able to go to the park. But there's two hours every day that's taken up with pick up, waiting, and then pick up again. Once the weather cools down even more, I can have Hannah walk to my parents house some days and she can spend time with my parents and come home after dinner.

There's so many more things I can think of to write about, but we'll save those for another day. I'm happy to have written this post and look forward to blogging again!