Thursday evening, we attended a reception for participants, and their families, of a recent project done at Loma Linda University Medical Center, the place where Rachel has had all of her surgeries, where her team of doctors practice.

The special project was that of a makeover to a major hallway on the 1st floor of the hospital. It's the hallway that leads from the elevators to the cafeteria as well as connects the Medical Center with the Children's Hospital. So it's a highly traveled hallway. The project name is called the "I Am Hallway". And in this hallway, now hangs about twenty pictures, up and down the hallway. These pictures are huge, maybe three feet by three feet?? If not bigger. The individuals chosen for the project have each been given an "I Am" statement. For example, "I am a Survivor", "I am a medical marvel", "I am Loved", and the list goes on and on. In the corner of each of these pictures, there is a paragraph that tells the story of the person and how it is that they represent their "I am statement".

Rachel's "I Am Statement" is "I Am Beautiful". To read and see pictures of it, visit her blog, Rachel's Journey, and read the post titled "The I Am Hallway".

So back to Thursday evening, this reception was attended by all the amazing people that participated in this project. There were young (one little girl was younger than Rachel), there were not so young, there were men, there were women, there were perfectly healthy looking individuals, and there were some that weren't. But every participant had a story. And as we got into the car after this event, I felt exhausted, emotionally and physically exhausted. I'd been fighting tears back most of the evening.

When Rachel was born with undetected birth defect, we were devastated. Deep down, we knew things were going to be okay, she had a long road ahead of her. But it was still hard nonetheless.

The evening represented a few different things in my mind.

For us, it was a celebration of how far we'd come with Rachel. That picture that now hangs on the wall in a major medical establishment, is a testament to God's unfailing love, His unfailing concern, and of answered prayer, many, many answered prayers.

The evening also made me think about people's outside appearance. To look at quite a few of those people, you would have no idea what things people had gone through. Others, it's obvious what people are going through, or gone through, - the boy in the wheelchair suffering from muscular dystrophy or the little boy about Rachel's age walking around the room with a walker and a tracheostomy, living his life with Spina Bifida, but just as happy and outgoing as he could possibly be. Every person has a story, some stories just aren't obvious. I need to take more time to learn people's story, who they are, how far they've come in life, do they know Jesus.

This week, one morning while the girls are in school, I want to go back to the Medical Center and stroll down the hallway, looking at every single one of the pictures, reading each and every one of the stories. The few I did read the other night were touching, I'm sure the rest will be too...
at January 21, 2012 1 comment:

It hardly seems possible that Christmas has come and gone and we are almost a week into the New Year! Growing up, I always felt as if it were a lifetime between Christmases and now that I'm grown up, it just doesn't seem that way.

The last month has been a busy one with lots happening.

The last week of November/first week of December had me living the Single Mom life, as Steven went to Maryland on business for a week. I was up really early most of the mornings, and staying up late most evenings. I don't sleep well when he's away, which isn't very often. And life around our house is very different when Steven's gone. He works from home and very rarely leaves the house with the exception of Bible Study every other week and a meeting here and there. So to not have him home, is strange to say the least. But we all survived. :)

The early part of December, our school district and the teachers were struggling to come to an agreement on their contract that was time for renewal. Upon returning to school from our Thanksgiving break the teachers were working only their contracted hours (7:45-3:00) and nothing extra. There was so much going on, and for someone like me who is always at the school, involved, I had no idea. So at for our December 6th PTA meeting, I invited the Superintendent to come speak and give the district's side of the feud. When opening the meeting, I said that PTA was not endorsing one side or the other, but were acting as a means to getting the word out. Sadly, the responses following that meeting that I received, as well as other PTA board members were not good. Some of the teachers became bullies and told PTA we needed to pick a side, and it should be the side of the teachers. It became a huge mess that resulted in myself, the Vice President, and the Parliamentarian having a meeting the very next afternoon, whereas all but six of our thirty three teachers were present. They gave us their side, and we were able to share how we'd felt after being treated the way he had in the previous 24 hours, and defend ourselves. In the end, for the most part, things are okay between the PTA and the teachers, but upon going on vacation, there were some teachers who still were not speaking to us. Time will tell how things are next week when we return to school after a three week holiday break.

The final week of school, both the girls tried out for our schools musical production of Disney's Beauty and the Beast. And after four days of auditions, letters went home on that Friday letting the students know if they had or hadn't landed a spot. I was very skeptical of my girls trying out. I know the commitment for this production is HUGE. And I was praying that both the girls got a spot, or neither of them did, so as to not mean so much running for me once rehearsals start (next week!). I am proud to say that both the girls were accepted and will be performing in this grand production. Dates are April 12, 13, and 14th.

On Monday, December 19th, Steven and I went into Hollywood to the Pantages theater to see WICKED! He bought me the tickets for my birthday as I absolutely fell in love with the production when we saw it for the first time three years ago. It was amazing. I loved it and of course left wanting to see it again, just like the first time!!

Christmas was very different this year as it fell on a Sunday. Not only did our church have our usual Sunday morning service, but we also did a Christmas Eve service. We attended both. We had a good Christmas. And again I'll say I can't believe it's come and gone. Every year, I say to myself that I want the season to just slow down so that I could enjoy it, and while I did enjoy it, it wasn't quite slow enough for me. LOL. 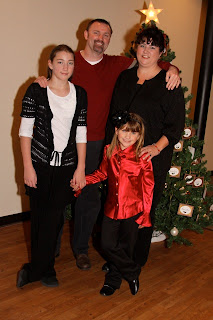 Picture taken on Christmas Eve
With the way the holidays fell this year, and the need to take a personal day from work, or he'd loose it, Steven had two four day weekends! We did several fun things as a family.

On Friday, December 30th, mid morning, we headed into Hollywood to the Pantages Theater to participate in the matinee lottery for $25.00 Orchestra seats for WICKED. With the girls getting ready to embark on their own broadway-like adventure in performing Beauty and the Beast, we wanted them to see something big and spectacular. And with the months and months of being subject to the listening of my soundtrack, as well as viewing a recorded show on DVD, Hannah was interested. Unfortunately, not one of us won the lottery, but following the ending of the lottery, the Pantages offers discounted tickets for $45.00. We decided that price was still a great deal and got in line to purchase tickets. Originally they had announced these discounted tickets were for the Mezzanine seats. But upon my purchasing the tickets, we were given seats for not only the Orchestra floor section, but it was the 9th row, four seats on an inside aisle!!! I was so excited to discover the location of our seats, and for the price!! We paid $45 a seat for seats that normally go for $163.00!!! The show was just as amazing as it had been eleven days earlier. Although this time we were close enough to see a lot of detail you miss when you sit in the balcony, even if it is first row balcony. This time, not only did I leave loving it just as the times before, so did Hannah, and before we were even out of the theater, she was stating the fact that she'd love to see it again! That day will forever be etched in my memory of a wonderful spontaneous adventure!!

The consolation adventure, had we not scored tickets in the lottery for WICKED, was that we had free tickets to the Long Beach Aquarium that were expiring on the 31st. When Rachel learned that we would not be going to the Aquarium that day, we promised we would take her the very next day. Which was the adventure for New Years Eve Day. We hit the road by 8:30, stopping at McDonalds for breakfast and got to the Aquarium an hour after it'd opened. Steven and mines goal was to get there and get home late afternoon/early evening before the craziness of New Years Eve set in. We met up with our good friends who also had tickets for the Aquarium. We spent the day together admiring the beautiful creatures that God placed in the sea and ended our time together with a late lunch / early dinner. We spent New Years Eve home, just the four of us. It was a quiet evening and relaxing for me as Steven worked on church work on the laptop. It was a nice way to end our two days of great adventures!

The New Year is off to a good start. I hope do get back to blogging more regularly in 2012. The girls go back to school on Monday, so it's back to our school routine. The next few months are going to go by rather quickly I have a feeling. And before too long, we'll be attending our daughters promotion ceremony from Elementary School!
at January 06, 2012 No comments: