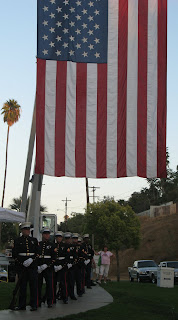 Today, as everyone in the United States is aware of, was the anniversary of the 9/11 attacks on the New York World Trade Centers. We spent the afternoon and evening at the local park "Remembering Our Heroes".

My brothers band, The Riverside Blues Club, played three sets through the afternoon. There were booths, and games for the kids, and free snow cones, etc.

And then about 6:00 the ceremony began.

Jericho, my brother's band that does worship music, then took over and opened the evening with a worship song. The evening then proceeded with the pledge of allegiance, our national anthem, and the recognition by the local fire department, police department, and the CHP (California Highway Patrol) of the 'Heroes' each of those departments had lost through the years, and recently.

And then Moms of the Military presented five families with banners that will hang from our city's light poles down one of our major streets each acknowledging a Hero. Hero's that have given their lives since 9/11 in the war against terrorism. Each soldier represented by a wife, mothers and fathers, children, numerous siblings, even a foster mom and dad. Each story was different, but the same. They'd all lost their life for OUR freedom.

As Jericho played another worship song, candles were being lit amongst the hundreds of people in attendance. It was amazing to see, and hard to capture by camera.

A twenty one gun salute then ended the ceremony.

It was a tearful evening. So many lives were touched on this day nine years ago. And we are a nation forever changed by the events of that day, but let us never forget who holds our future...