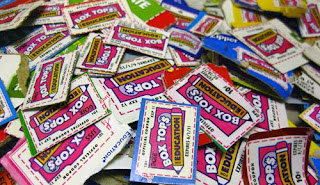 The coordinator currently in charge of the Box Tops program at our school is approaching her final year at the Elementary School and she's been looking for people to take over her jobs at the end of this school year, so that next year, while she won't be in charge, she'll still be around for asking for help.

Several months ago, she approached me about taking over the position of Box Tops coordinator for next school year and I accepted. This morning I began my training...

Last Friday, the current Box Tops for Education contest at school came to an end. Those Box Tops must be counted into groups of 50 and then mailed off so that we can get a check in return. She showed me how to package up the box, counting, and then going about prize distribution to the classes who won 1st -5th places. Today's box that is being shipped off had 15,063 Box Tops!!! And that's just since mid-October.

I'm looking forward to the position next year, it's definitely one of the easier jobs to take over, and will be fun to see how much money we can raise for our school!
at February 22, 2010

Have fun with the Box Tops. Our whole family really gets into it (even Aiden who loves to get any of the pieces of trash that fall on the ground and throws them in the trash). I have a busy Friday ahead of me since I am waiting till the final hour to collect the schools B.T. and then running them to the post office on Sat for the 2/28 deadline. I am hoping we end on a high note but don't think we will make our goal this year. :( people see to be just burnt out and apathetic in all areas of life at our school.