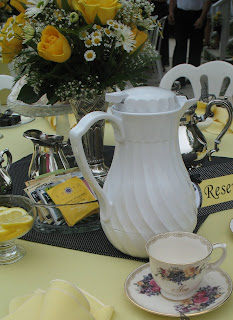 I promise one of these days I'll stop talking about the wonderful tea, but there was just so much good stuff, so much that that Lord tied together, I can't help but share it.

The invitation for the tea said to bring with you your favorite tea cup. Being the tea cup collector that I am, I have close to thirty tea cups that I proudly display in our front living room in various spots of the room.

I wasn't sure which one to bring. I thought about bringing my Disneyland tea cup with Tinkerbell on it, that would for sure be a unique one and would represent my love for tea cups as well as my love for Disneyland. But ultimately, I decided upon my "Joy" teacup. I carefully washed it and off to the tea we went. I had no idea how the choosing of my tea cup would tie into the message that I would later hear that morning.
*********************************************
The night Rachel was born, I told my Mom that we had quite the journey ahead of us, in terms of her birth defect. Two weeks later, at the end of the day following our 'Welcome Rachel" party, I discovered a gift on my pillow. It was from my Mom. With the gift was a card with a beautiful hand written note talking about the long journey that we had lay ahead of us with Rachel and how I needed to have "Joy in the Journey". So my 'theme' when it has always come to Rachel was that I would be an example of HIM through having joy on this journey with her. The gift that accompanied that card was this tea cup, my JOY teacup. And for many, many months, it sat on my bedside table as a reminder to have Joy.
*********************************************
During the message, in the second point whereas my Mom was talking about the Reflections of Beauty In Our World, she talked about how the woman who could pull herself up and go on perhaps after her husband up and left her, was a reflection of His beauty. That the family who could pull themselves up after a home foreclosure and carry on was a reflection of His beauty. That the woman who gave birth to a child with a birth defect and pulled herself up and brought comfort and compassion and encouragement to another mother, was a reflection of His beauty.

Yeah. See the connection there? I lost it. I have never been so intensely moved to tears as I was with that statement. I breifly feared that I would not be able to stop crying, but thankfully the Lord knew I'd been touched and he caused the tears to stop.

Over the last four and a half years, I have met several women via in the internet, and have even met two mothers locally, Joy and Kelly, who've all experienced having a baby born with a cleft of some sort. Never have I thought as my encouraging these other mothers as a REFLECTION OF HIS BEAUTY.

The Lord knew what my Mom's message held. He knew. It was Him that prompted me to bring the tea cup I did and with that, it's just another example of how His hand was on every detail, big and small, of that garden tea.