There've been many people praying for Rachel this week, and for us, and the prayers have been felt and very much appreciated.

I knew one of the hardest things of this week would be sending off Rachel to surgery. And it was hard, but not as hard as it could have been. For starters, Rachel's surgery was scheduled for 11:45, which gave me some time to have a bit of a normal morning. But once checked in at the hospital, the previous surgery had gone quicker than expected and they were ready for Rachel. So there wasn't a lot of time to wait for things to happen. It happened quick and fast and I think it was better that way and God knew I needed that.

During Rachel's surgery on Wednesday, while we were gathered in the waiting room, one of the hospital volunteers came and uncovered the Grand Piano sitting nearby and he began to play beautiful music. One of the songs he played was "Heart of Worship". It was beautiful. And as hard as it was to hear a worship song being played during that time, it was also needed. "Heart of Worship" is a song that's etched into a few family memories - my brother and sister in law sang it at their wedding reception, and it is a song that was played during my Gramma's memorial service. And now, Rachel's surgery will be added to that list. 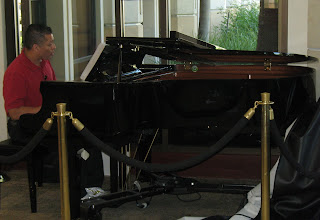 On Thursday morning, I posted on my Facebook status and within a post on Rachel's blog, asking for prayer for Rachel to better deal with the nasal stents. Many of you began praying for that very request and as the day progressed, Rachel became more tolerant of the stents and wasn't demanding that they be taken out. It's been over 24 hours since she's even mentioned the stents, much less asked for them to be taken out. The Lord heard those prayers.