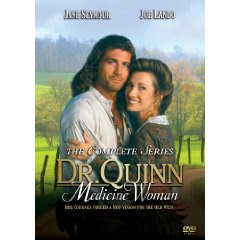 One of the things I got for Christmas was the complete series of Dr. Quinn Medicine Woman. All the seasons, including the movies, all on 42 discs!

I loved that series when it was out on television, and I never missed an episode. Over the last few days, we've been having a Dr Quinn marathon, watching two or three episodes at a time. The girls are loving watching it. And it's been nice to watch one episode one right after another with no commercials!

I'd say it's a family show. A lot cleaner than most options on TV today. But as a mother now, watching it with her children, there are a few things that come up in the episode that makes you wonder if it'll slip right by your almost ten year old or not.

For instance, anyone who's familiar with the show knows there is a saloon in the town, and operating within the saloon are prostitutes. After watching a few episodes, Hannah noticed that one woman in particular was always in the saloon and she inquired about her always being there. I simply answered that she worked at the saloon. That answer wasn't enough for her. And she questioned exactly what the woman did do. Steven simply told her that woman got paid to be nice to the men who came into the saloon. LOL. And that was the end of that. She was happy with that answer. There's a few other things I can see coming up that might need explaining. But for now, I'm sure enjoying my Christmas present!!!
at January 05, 2010

Its funny you should post about this topic. Over Thanksgiving break we were watching Grease with all my nieces. We quickly shut it off I can't believe how much bad stuff is in that movie. It makes me mad because it was one of my favorites.

It's funny how more in tune to those types of things we become when there are children in the room.

I have season one and season four (don't ask! LOL) and we started watching season one thinking we could watch it with the kids, but like you said, there was a lot more "stuff" in it than I remembered when I used to watch it without kids.

We have now recorded seasons 2 and 3 off DirectTV so we can watch it all in a row...but without the kiddies. :)

Oh, and another thing (LOL), the other day we were watching The Jetsons--yes, The Jestons--and decided to turn it off. Whew, I couldn't believe all the adult "humor" in that show. I do NOT remember that at all. :)

I love Dr. Quinn, but you're right - we have to be so careful with what we let the kids watch. TV can sure make for some uncomfortable times, especially if they're not ready to hear the whole explanation!

I remember a Massengil commercial coming on when I was a little girl when the whole family was watching TV. I asked my mom what they were, and she said she'd explain it to me later. I said, "You ALWAYS say that! I Want To Know Now!!" I can only imagine my parents' laughter once we were all in bed! =)