We went to Disneyland last night with some of our church family who also have annual passes. The parks were crowded, but we had great fellowship while waiting in the long lines.

After we left the parks we migrated to the local Denny's just a few miles down the road. We've hit Denny's a time or two before when we have been a large group not wanting our time together to come to an end, aside from the fact that we're all hungry and it's cheaper to eat outside the parks. 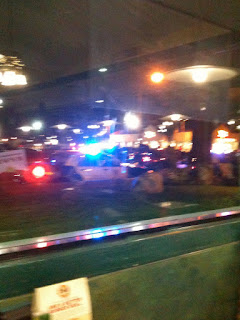 And here we are, inside Denny's, all windows, facing the action. All of a sudden the police officers, behind their patrol car doors had their guns drawn and pointing at the pulled over SUV. And then slowly, one by one, a total of six young men excited from the Suburban and placed into the back of separate police cars, all but two, who remained cuffed and sitting on the curb. 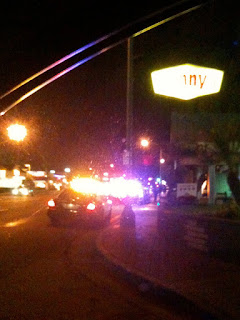 And then we saw the police officers pull out the big guns, and I mean that literally. Three police officers approached the SUV with drawn shotguns!!! They cleared the vehicle and the guns were put away.

Once the suspects had been taken into custody, and the vehicle was cleared, we felt it was then safe enough to leave Denny's. The front door faced the street where all this action was taking place, so it really wasn't safe for us to walk out the front door. So we left, and walked the long way around the building to our cars. Here, Nathan takes the opportunity to pose for a 'thumbs up' picture with just some of the patrol cars behind him. 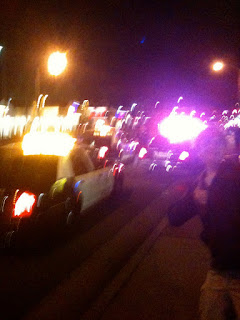 It was an eventful outing to Denny's to say the least. Alarming when we saw the guns drawn and pointing in the direction of the car, even more alarming when we saw the shot guns. There really wasn't anywhere for us to go but stay where we were. I've tried researching what might have happened on the local news websites, but no such luck. It's definitely a memory we'll talk about the next time we're all at Disneyland together...or at Denny's!!
at January 09, 2010

Oh, my - talk about an eventful evening! Glad you were all able to stay safe while witnessing the action!