Look What I Got for my Birthday... 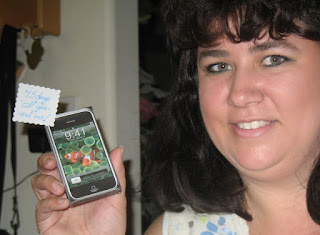 ...it's a paper iPhone!! My clever husband put this together.

In July 2008, when we stood in line for four hours to get Steven an iPhone, he offered to buy me one. But I declined for two reasons, first, I was trying to be a good servant and avoid the high monthly service fee and second, I could not get a hang of the touch keypad. So I did not get one that day. And ever since about 2 months later, I've regretted that decision. I love Steven's iPhone. I can now type on the keypad faster than you would imagine and I can't wait to have one of my very own.

But you see, there's that little issue called a 'contract' that has prohibited me from getting one thus far. And believe me I've tried every way to get around it in order to upgrade sooner and the answer from AT&T is always "No". My contract is not up until March, but for some reason, Steven's is up in December, December 12th to be exact. But no one is counting the days around here or anything, nope, no one.

So this morning when I was opening up my birthday present from Steven and the girls, I got this iPhone with a note attached to it that I only have 45 more days until I can get my real phone! LOL. I loved it so much, I had to take a picture!
at October 29, 2009

What a clever husband. I hope that the 45 days comes quickly.

I just got a iphone as an early Christmas gift and I love it.

I know exactly how you feel. When that came out, everyone waited in line for them, and I could not wrap my mind around waiting in line for a cell phone. When I got to use my dads I knew why. But like you, I had a contract that was not up for another year. So for my b-day this year, Jon got me one knowing, my contract with verizon was up the month before! I how I love my phone!