It's Fall Time at Disneyland

The Halloween season kicked off last weekend at Disneyland. I love this season at Disneyland with everything all decorated for Fall, I can do without the ugliness of Halloween. But I like the colors and smells this season brings.

Disney is really promoting Halloween time this year with a whole new fireworks show, redo of Space Mountain for the season, and a few other things. The new fireworks made it debut on Friday night and me and the girls were there to watch. We left right after we picked up Hannah from school and made our way to my Happy Place. 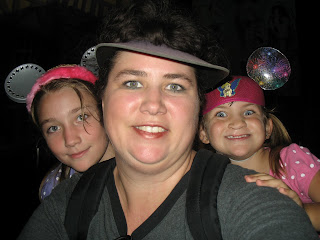 We hit California Adventure for a while, going to the Animation Building for a while (cause it was cool in there) and taking pictures with some characters. 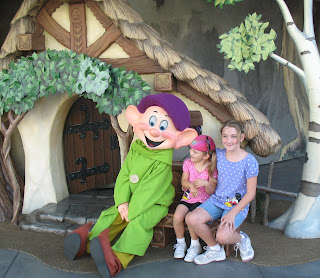 We eventually found a classmate of Hannah's who was there celebrating her birthday and we hung out with her for a while and did a few rides. And then we went and grabbed a spot for the fireworks. The best seats in front of the castle were all ready filled up, and that was with an hour and half until showtime. We still got a good curb seat. The new show was done to all the villainous Disney music. I liked the fireworks show. Rachel cried through most of it, and Hannah said it was too loud as we were directly below a speaker. But I enjoyed them! 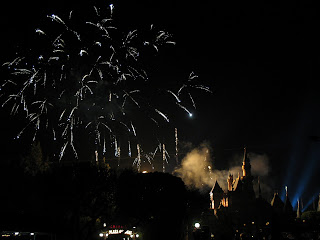 Having been sitting for an hour and a half, I didn't realize how crowded and filled Main Street had become with people viewing the fireworks. But it was bad. And for some reason, the Cast Members appeared to be not ready for the crowds. Why? I have no idea, especially since they were handing out "In anticipation of large crowds..." notices at the parking structure. But it was gridlocked and panic set in for a brief moment as NO ONE was moving, the air was still, etc. They finally opened up the backstage area to lead out to the exits, and then it started moving. Here's a shot of Main Street, that's all people!!! 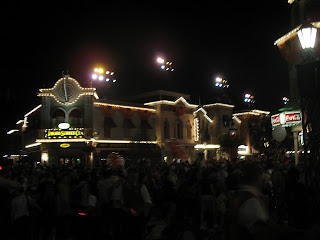 Despite the crowd getting out, I had a great time. I always enjoy the time it's just me and my girls after not having been with both of them for a while. They had a good time too, and we're looking forward to returning again this Friday night to finally see Murphy, the Fantasmic dragon!
at September 27, 2009

Halloween and Christmas are my favorite times at Disneyland.