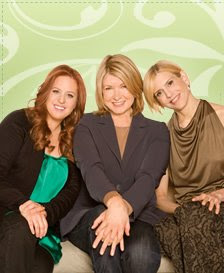 I remember hearing this show mentioned over the holidays, but I can't remember who mentioned it. But with nothing to watch on television last night, we discovered "Whatever, Martha!" was on the Fine Living Network and tuned in to watch.

"Whatever, Martha" is a talk show like television show that has Martha Stewart's daughter, Alexis, and her best friend watching old episodes of Martha Stewart Living and giving their "witty, irreverent, comedic points of view". It was absolutely hilarious to watch.

If you're looking for something funny to watch, I highly recommend checking your cable/satellite listing for "Whatever, Martha".
at January 08, 2009