Rachel wants a dinosaur for Christmas. Yes, a dinosaur. His name is Kota the Triceratops. She first saw it a couple months ago at Costco and has wanted it ever since...even told Santa about it when he came to her school last week.

We've been telling her she wasn't getting it because it was expensive and it's so big. We've been working on getting rid of all the big stuff, not acquiring more, especially indoor stuff.

But it's the one thing she continually asks for over and over again.

The other day I saw it at Target marked down to $99. I debated. But I had her with me, it was pouring down rain, and truthfully, I did not want such a big thing in my house. I stood there and thought about how excited she'd be if she got it. But I thought too long (or God decided for me! LOL) because when we saw someone put the one and only one in their cart, she said "There goes my dinosaur".

We then went to Sams Club for laundry soap and they had one for $149. But in the course of us walking around for 20 minutes, when we walked back by the stupid thing, they had marked it down to $94.81!!

So with the help of my mother who took Rachel to the car and preoccupied her, I was able to buy it, rearrange all the groceries so it'd fit into the back of our van, and then got it into my moms house to store for a few days without Rach seeing it. LOL. 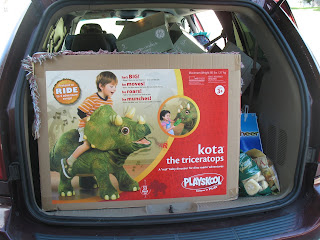 She is soooo totally going to flip out on Christmas morning.
at December 19, 2008

Holy moley. I had seen it on TV, but I didn't realize it was THAT big! Whoa!

Oh Yeah. Now you see why I absolutely did not want to buy such a big thing. LOL.