Immediately following picking Hannah up from school, I took the girls to my parents house. Rachel was so excited all day long, she kept asking if we could go get Hannah for she knew once we picked up Hannah, they'd be going to Gramma's.

Once home, Steven was done working and we were on our way. We arrived to Angel Stadium about 3:30, parked, and got in line. There were about twenty-twenty five people ahead of us. 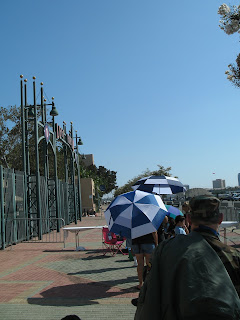 The gates opened at 5:30 and we met up with my Aunt who took us to our seats. And what awesome seats they were!!! They were six rows from the front and perfect! 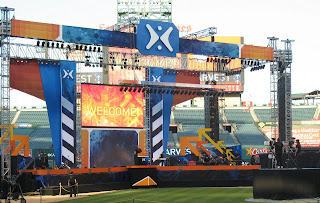 The Crusade started at 7:00 and shortly thereafter we were joined by our friends, Keith and Amy. The worship was led by The Katina's, who did an excellent, excellent job. However, there were two other groups to perform before my much anticipated performer took the stage. 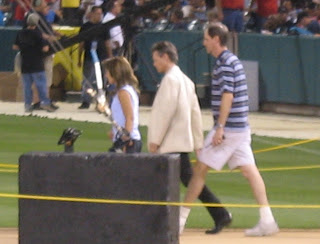 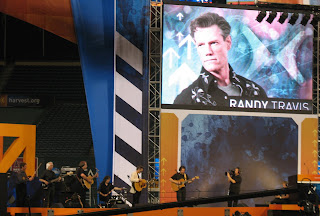 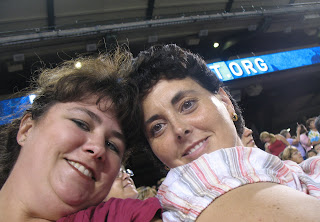 Pastor Greg, taking the platform,
delivering one of his best messages I've heard in a long time. 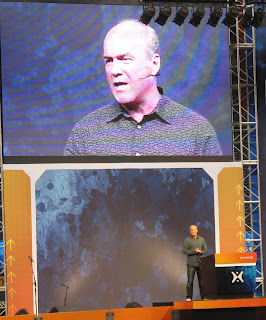 This is as close as I got to Randy this evening.
Amy made me take this picture. 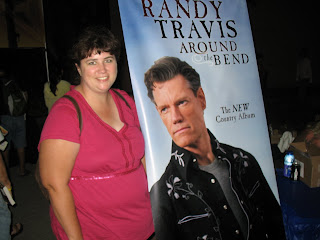 Only miles away, with over two hours left of park operation,
and NO kids for either of us, we headed for Disneyland! 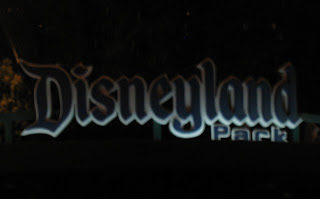 First time we've been to Disneyland together with NO kids in tow! It was so much fun! We stopped and had ice cream and then were able to hit three rides before the midnight closing time. 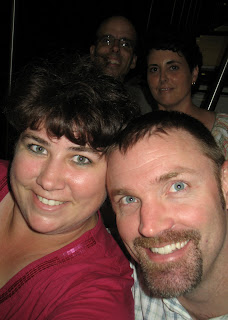 Not making it to the car until after 12:30, it made for a late night out and about . Thankfully the kids were at Gramma and Papa's and we knew we'd be able to sleep in!
at August 16, 2008

That is so weird because I watched it online and they said that Randy Travis was not able to perform due to contract limitaions, and they showed Dennis Agajannian instead. I thought oh bummer. Darcy went all the way there just to see him and he couldn't perform. I guess he was able to after all.

I watched the archived version so maybe they just weren't able to record it.

There was something in his contract that wouldn't allow his performance to be broadcasted via the webcast. My parents were watching it LIVE and it cut to Lost Boy stuff just as they introduced Randy Travis and said they couldn't broadcast him.

So the only bit she got to hear of Randy singing was when I called on my cell phone and waved my phone back and forth for her to hear...it's kinda a thing I do when I see Randy in concert....call and not talk, just hold the phone up for her to hear. LOL.

Dennis was there in addition to Randy.