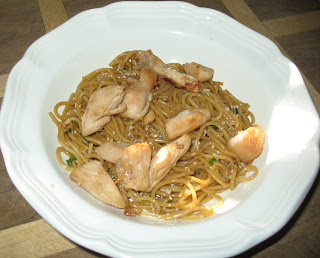 I tried a new recipe last night for dinner. I can't remember where I originally found this recipe, but it's been in the pile to try for months.

In the process of making it, I thought it would end up too salty, because of all the Soy Sauce the recipe called for, but it didn't! I did use half low sodium soy sauce and half regular soy sauce, so that might have made the difference.

But it was SO good and tasty and really easy!

4 boneless chicken breasts - I sliced them into strips before marinating

Directions:
Funkying the Chicken:
In a bowl, mix the soy sauce, teriyaki, garlic, brown sugar, and the ginger. Making sure the sugar dissolves completely. Add the chicken, making sure it's all coated with the sauce. Cover and stick in the fridge for 2-3 hours.

Making the Sesame Noodles:
Cook the spaghetti according to package directions. Drain. In a jar (I used my Tupperware shaker), combine the soy sauce, sesame oil, ad the sugar. Shake well until well blended and the sugar is dissolved. Pour over the pasta. Toss with scallions and sprinkle with the sesame seeds. Set aside while you cook the chicken.

Cooking the Chicken:
Remove chicken from the marinade, tossing out what's left. In an electric frying pan, spray nonstick cooking spray (recipe says to use Sesame Oil, but I prefer to cook with Pam). Add the chicken and cook until pink is gone. Remove chicken from the pan and serve over the noodles.
at August 17, 2008