We've gone to Disneyland on New Years Day for many years now, and I am pretty sure today was the busiest we've see it on the 1st. Years past, people are hungover, watching football games, at the Rose parade, or just home. But today, it felt as though everyone was at Disneyland. The lines getting into the parking structure were so bad I called Uncle Bart and he literally turned around and decided to not come. There was a huge line for guest services for getting in free for your birthday, so I think the new celebration promotion that started today is already proving to be a success. 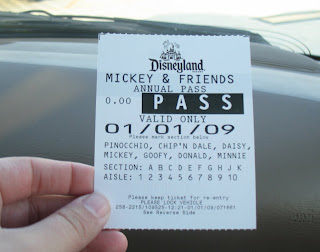 The Christmas decorations all start to come down after this weekend, which is why it's always fun to go on New Years Day, to see everything festive just once more before the season ends. The one thing I absolutely wanted to do today was ride It's a Small World. It reopened mid-November after an eleven month rehab and I wanted to see the changes that were done to the ride before they close it this next week to take down the Christmas decor and make even more changes. The line, although still long, was not as long as I've seen it in recent trips. I think we stood in line for 25 minutes, which is a lot longer than I would normally stand in line for, but I really wanted to ride this today. 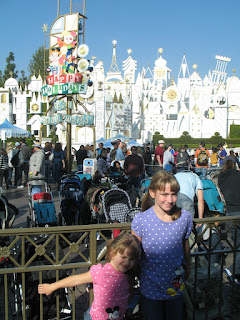 From there, Steven and the girls went to do Star Tours and I went to get Fastpasses for Indiana Jones for Steven and Hannah to ride later in the afternoon. There was a line for Fastpasses!! It took 15 minutes of waiting in line just to get a Fastpass that wasn't even good until four hours later. I stood in line and got the Fastpasses, just in case we were still around come 6:15, but at that point, I was pretty sure I was done. 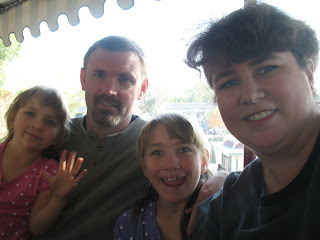 The girls trying to sneak a peek at Tinkerbell and her fairy friends. 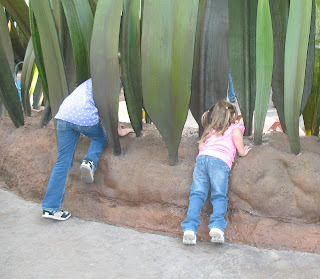 I met back up with Steven and the girls and we attempted to fulfill one more thing that would make my Christmas season complete - peppermint ice cream from the ice cream store on Main Street. The line was too long and I had had it. Too many pushing people, too many rude people, just plain ole too many people! 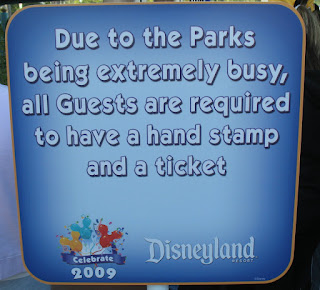 Unfortunately, the line for Soarin was an hour wait. So we skipped it and officially deemed it was time to go. Let it be known for the record books, that Steven lasted a lot longer than I at Disneyland today. I was the one pushing to go. Anyone who knows us, knows how big of a deal this is. LOL. 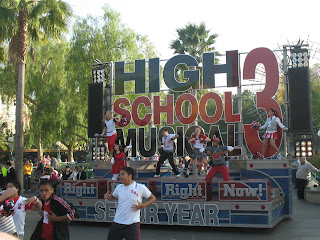 After the parade, we left. We made our way to the tram and got ourselves to our car. We did stop at one of our favorite restaurants on our way home for a nice New Years Day dinner. And I am grateful for the time we spent together as a family. I'm just sad it was so busy and simply became unbearable for me to be at Disneyland. Better Luck next time...
at January 01, 2009

I hate going to disneyland when it's crowded. I do think that one of teh perks of having passes is that you can leave early and you don't feel like you have to stay to get your money's worth. I am glad that you were able to do some things. What a way to bring in the New Year!

Oh yeah, having a pass eliminates the pressure of having to stay from opening to closing. Or for hours.

There have been a couple of times that based on how packed the parking lot (before California Adventure was built) and even in recent years of where we had to park BEHIND the parking structure where employees park, and based on how crowded the tram loading area is, we've not even boarded the tram, we've left.

Great pics!!!!
I wish you and your family a happy new year!!!

Wow. I didn't think I'd ever see the day that you would say Disneyland was too busy & that you wanted to go home.