It's New Year's Eve and what are we doing?? Doing what a lot of people do on New Year's Eve...having people over and playing games. I thought I'd share a couple of our favorite board games just incase you want to rush out today and purchase it for your New Year's Eve get together!

The first game, we've had for over ten years. It's called Compatibility. In recent years, when my mom was looking for it, it was really hard to find, but it appears some online sites are now offering it again. It's a game where you randomly choose a topic and then select cards from your pack of expressions cards that you feel personally best represent the chosen topic. You don't reveal until everyone is ready and then you and your partner reveal at the same time. Based on if you had selected the same expression cards, and how you placed them in order of importance, you score more points. We played this game on Christmas and it's always a lot of fun! 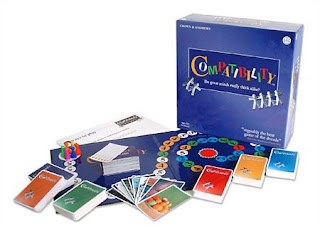 The other game, we learned of from a friend about a year ago. We played a make shift version at a birthday gathering of just a few couples. I found the game at Target and have had it for a while now and we just opened it on Christmas. This game was a lot of fun, and I think works best when you have six players. This game, you're asked a question and write the answer down, and then one person has to guess which answers were written by who. This game was a lot of fun!!!

The next game is a game we were introduced to while camping with our church friends in July. It's called Mexican Train. I don't know how to play normal dominoes, but I think it's something like that. You basically match up the colored tiles, etc and play off each other's 'trains' etc. I bought ours at Walmart and it specifically is called "Mexican Train". 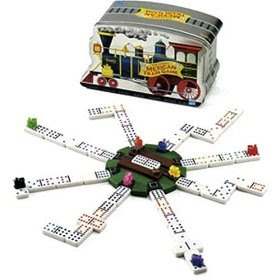 Another fun game is SPOONS. You play with a deck of cards and plastic, or real, spoons, minus one for the amount of people playing. The goal is to collect four cards of the same suite - four 3's, four queens, etc. And as soon as you get it, discreet is best, grab a spoon in the middle of the table. Soon, other players will notice and they'll take a spoon. The person who does not get a spoon, gets a letter - for example if it's their first time not getting a spoon, they get "S". It's a fun, mindless game and is best played with at least 3 players. 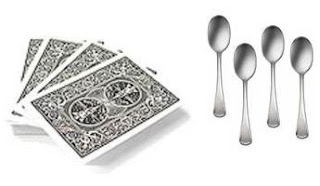 Our family loves games too. Spoons is one of the classics but I will not play with my dh he has hurt me too many times...lol Happy New Year.

The kids got a couple new games that are fun but not mind-numbing for the parents: Apples to Apples (the adult version is really fun!), and Ticket to Ride. Ed and I love Ticket to Ride and have played it more alone than with Ryan, though he likes it too!

LOL Letti, yes, playing Spoons is a risky game. Especially if you're playing with a lot of women with wedding rings that stand up.

I haven't played Spoons in so long that I had actually forgotten about it. My family loves to play Mexican Train, but the competition is crazy maddening. Hope you had a wonderful time.