Last year, following the Halloween parade at Hannah's school, I wrote this post in regards to this picture: 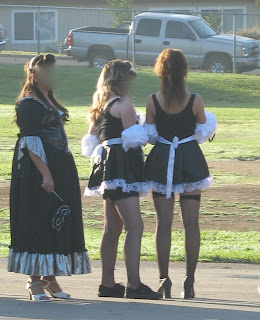 While I knew these costumes stirred quite the upset amongst us moms who were standing together, I had no idea just how many others were upset about the French Maids until last month, when I was at a PTA meeting. I guess for a while it was up in the air as to whether or not the principal would allow the traditional Halloween parade this year.

Well, the parade will go on, at least for another year, and last week, a letter came home addressing the Halloween parade and it's costume "rules and regulations".

The first item on the list was stating the theme for the parade. The theme is "literary characters". Um, okay, we've never had a theme, but that's okay. I then panicked about the costume Hannah was going to wear, she was going to be a Jedi and I quickly decided if she couldn't be a Jedi, I wasn't buying her a new costume just for a 30 minute parade and she'd just not dress up. But HELLO, there are Jedi's in the Star Wars books. :::Whew::: We're covered. Made me feel even better when she told me she'd asked her teacher about being a Jedi and the teacher said is was 'okay'. But if you really get to thinking about it, almost everything can be found as a character in a book. Everything. Even French Maids.

The second and third rules, I believe are the most important. "All costumes must follow the District dress code" and "all costumes must be age appropriate (no revealing costumes)." Whoo Hooo! The dress code is being threatened. LOL.

The note ended with the warning that if students do not follow the guidelines, they will not be allowed to participate and will be asked to change immediately.

I'm thinking that since the principal went to the trouble of writing and sending out this letter, that perhaps this year, the costumes will be closely monitored. Here's hoping they won't have to ask students to sit out and that the parents were responsible with how they let their student out the door that morning. We shall see come Friday morning...
at October 28, 2008

WOW, that is not appropriate. It amazes me what parents let their kids wear these days. Andrew had a girl in her class (3rd last year) wearing a slinky outfit. WHY? ugh!! hopefully the reminder will take care of that for your school and their won't be a repeat issue.

I am sooooooooooooo glad that they did this! I remember those costumes from your post last year. Thank goodness they're putting their foot down this year!