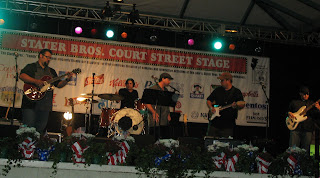 My brothers band, The Riverside Blues Club, was the opening act last night at Route 66. They did an awesome job! The lighting, the sound, the lead vocals, all the instruments, all awesome. It was a lot of fun and I enjoyed seeing my brother up there playing and having a good time. Proud of ya man. :)

What was even more funnier was the people that came out of the crowd. At first it was this one lady. She didn't just dance one song, she danced the entire set, right up until the band took a break! And then she never came back. She was funny to watch and even ended her final dance with the splits! She told us she was 65!

There were others who came out to dance as well. Some were good and were fun to watch, and then there were some ones that were bad and even funnier to watch!!! Like this lady, she was funny, but we were afraid she might break into a strip tease and not leave anyone teased but would really take stuff off!! And then there was this guy, who as my brother put it "was angry at the ground or something".

That was all fun. But you know, outside that stage area, that place gave me the creeps. We had to park about six blocks away from the stage and walk through the streets lined with vendors and beer gardens. People smoking and playing loud music. The area of town isn't good and the type of people that came out after dark were downright creepy and scary, obviously, cause some of them came to show off their moves. LOL. But seriously, if it weren't for the band playing there, we wouldn't have gone. But we left with some good laughs from the evening, that's for sure!
at September 19, 2008

Too funny! I think you're right - she did look like she was one song off from starting the strip tease... She and her dance partner look like they've had a little too much to drink!

And the guy - was he the same one that was dancing with the strip tease lady? Someone needs to sit them down and tell them that Paula Abdul and Randy Jackson have dance lesson videos available for a nominal fee... ha! ha!

Oh my goodness!!! I TOTALLY cracked up watching those dancers!! That was sooooo funny!