Two years ago, I blogged about this fantastic bargainl I'd found on Kota the Triceratops interactive dinosaur. He was Rachel's Christmas present that year, and he's been a good pet. But he's never been one to be played with a whole lot. And honestly, he's taking up a lot of room.

So a few weeks back I listed him on Craigslist for $100 as I'd see him going on Ebay for at least that much, in addition to other ads on Craigslist for that much. I had someone interested in him and as I was going to meet the person, she contacted me and told me something went wrong with her husbands payroll and they wouldn't be able to buy Kota this pay period. I offered to hold Kota for her, and she never answered any further emails. :::sigh:::

So I listed Kota on Craigslist again the middle of last week. Listed him for $95.00. This time I included my cell phone number on the ad. On Saturday, I received a phone call from a man who was interested in Kota for his daughter for Christmas! Not only was he interested, he was willing to drive all the way from Oceanside (75+ miles one way) to get him from me!!

This afternoon, we loaded Kota up in the back of the van, and went to meet Kota's new family. Kota will soon become the pet to an almost four year old little girl who has this fascination for all things dinosaurs. She has a new baby brother that will enjoy him in the years to come. 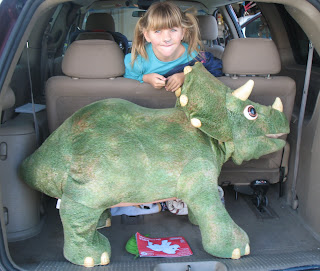