Heatwave Across the Nation

Up until the last three days, Southern California has had great weather, something we're really not used to in the months of June and beginnings of July. Our temps were mild, low 80's, while the Eastern part of the United States was getting slammed with our normal high 90s and even some triple digit temps. All the while we knew how good we had it and were very thankful for the mild weather.

But two days ago, BAM! Just like that, overnight, we went from mild to triple digits. The heat is scorching and the humidity is great. And low and behold thus the official summer season in Southern California has begun!

Yesterday, as I was with friends poolside, my friends husband was reading the newspaper and came across the weather section and we were all fascinated, and thought it was kinda eery, that the weather map for the United States showed that all the States were experiencing a heat wave, the coloring in the map showed that all the States were experiencing temps between the 80's and the 90's.

I found a weather map for today's weather and it's pretty much the same all across the nation, a heatwave. 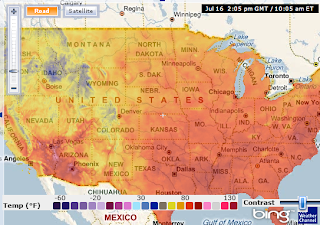 I think it's just another reason to be looking up!

"Nation will rise against nation, and kingdom against kingdom. There will be great earthquakes, and in various places famines and pestilences. And there will be terrors and great signs from heaven."
Luke 21:10-11
at July 16, 2010

Oh yes, you can find me down near the bottom of that map in the burnt orangey red colored area. :)