Good Times at the Laundromat

I've never had to take our laundry to the laundromat, I have always been fortunate enough to have a working washing machine and dryer.

But this last Sunday, after returning home from camping, I decided to take all our blankets to the laundromat and get them all done in one swoop instead of dragging it out for days using my smaller machine at home.

I thought for a Sunday afternoon, it would be busy, but it was just me and another guy. After I acquired some cash, changed it in for quarters, and selected my machines. I read the directions as to how to operate the front loading machines and in went five blankets in four machines. And then I sat waiting, thankful I had an iPhone to pass the time. 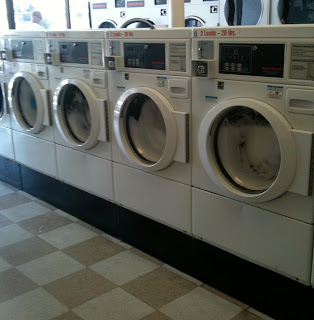 Towards the end of the cycle, I noticed one of the machines starting to leak suds out the front. I didn't think anything of it really and patiently awaited for the machines to finish up.

Once finished, the blankets were all still very sudsy. Not rinsed at all. And still very much full of water. The suds began to spill out onto the floor as I opened each door...I had used too much laundry soap. The first thing that came to my mind was that episode of The Brady Bunch whereas Bobby and Cindy used too much soap and caused the laundry room to overfill with suds. LOL.

After scratching my head for a few minutes and trying to decide how to fix this mess, I loaded the blankets into the biggest machine they had, and rewashed them, this time not using any detergent. 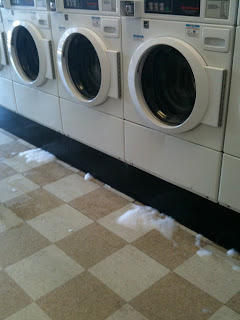 This picture was taken after a lot of the suds had dissolved.
Meanwhile, the laundromat was beginning to get busy and people were coming in and were concerned about the suds on the floor. LOL. I would have cleaned up my mess, but there were no paper towels or a mop to be found. I simply just sat there, minding my own business, surfing about on my iPhone, acting as though I had no idea about the mess or who'd done it. LOL.

Finally, I was able to get all the blankets into dryers and eventually made my way home. But I'll never voluntarily go to the laundromat again, for one it was expensive!! And two, I hated all that waiting around. And three, I hated not knowing what I was doing. :)
at July 30, 2010

That's so funny! I wonder why the normal about of detergent would be too much for the front loading machines. I would've reacted the same way!

I have NO idea. LOL.