A week ago, we had the opportunity to hang out with some longtime friends. It was supposed to be a group of us with our kids, but one by one, things came up, or more than one became sick, and in the end, it was just me and my girls, and Carolyn and her two children.

Carolyn and I have known each other for years and years. She was the camp nurse way back when I used to be a primary camp counselor in the Children's Ministry at Harvest. When we both were pregnant with our firsts in 2000, we reconnected and once the girls were born, we started making trips to Disneyland together. We're both Disneyland fanatics and as new moms, it was fun to put our girls in their strollers and go to Disneyland. Those were the days when Disneyland was empty, walking down Main Street just about being the only ones.

We both were blessed with girls the first time around.

We always wanted one of each. Carolyn always dreamed of having two girls.

It's funny how things work out, because as much as we wanted a girl and a boy, and as much as Carolyn wanted two girls, I know that neither of us would want it any other way. And it's a reminder that the Lord always knows whats best, even coming right down to the gender of your children! 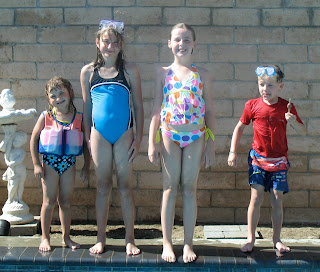 It's true, we do adore our boy!!! Thanks for sharing time with us ~ they had fun!!