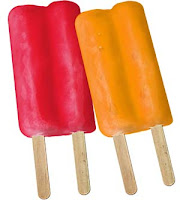 Normally, we do two assemblies for the school with the money we bring in, but it just didn't work out this Spring for a second assembly. So yesterday afternoon, the entire school was rewarded with Popsicles for our awesome efforts in Box Tops collecting. And I helped the Box Tops Coordinator for our school pass out the Popsicles to the 765 students at our school.

It was great to see a lot of the kids that Hannah has gone to school with the last four to five years, but haven't been in her class this year or last.

Many of the children said "Thank You" and you could tell it was a genuine expression. And those were appreciated.

Surprisingly, there were two or three students that hugged the three of us moms and said "Thank You PTA Moms". That was rewarding to me. To have these few kids, not have a clue as to who I am, just that I am a PTA mom, and give me a hug and say Thank You.

We of course had those who weren't happy with the color of Popsicle they were given and kept badgering us for their Popsicle color of preference.

But the one little girl who sticks out in my mind from yesterdays Popsicle Fiesta, is the little girl who asked if she could have a second one to take home. :( It made me wonder if she rarely gets treats like that at home? Did she just like the Popsicle so much that she wanted a second one for later in the day? What was her story I keep wondering...
at June 02, 2010