About a year or two ago, we met at the home of one of Steven's previous co workers with a few other ex co-workers.

One of the guys brought the combination of Peppered crackers, Fig Jelly Spread, and Drunken Goat Cheese. The idea was you spread the jelly on the cracker and top with a slice of cheese. I tried it and LOVED it! It was the yummiest combination.

Ever since then, I've checked for that cheese every time I've gone to Trader Joe. Never having any luck.

We were with one of those co-workers recently and she told me that the guy had bought the stuff at Bristol Farms. A store we don't have here in our area.

Last week, while we were in Newport Beach, there was a Bristol Farms not far from our hotel. So on Tuesday afternoon, we headed there and found the drunken goat cheese, fig spread, and crackers and took it back to our hotel room for a late afternoon hors d'oeuvre. 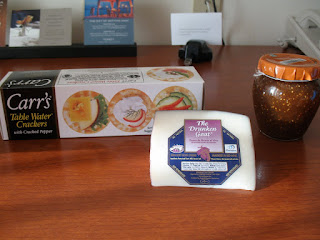 It was yummy, and a rather expensive 'snack'. But hey, that's what vacations and anniversary get aways are for, right?
at March 31, 2010