We've been away for a few days for our anniversary since Sunday, but today is the official day, our 14th anniversary.

Before kids, going to Disneyland was our thing, well, one of our things, and it's not very often that we go without our girls. So this afternoon, we did just that. We went to Disneyland for a few hours. We stopped off at City Hall and got anniversary buttons, which I promised Steven he did not have to wear, I just wanted the buttons and a picture and then we could put them in my purse. They're cute buttons, and the Cast Member even put the year and how many years we were celebrating. 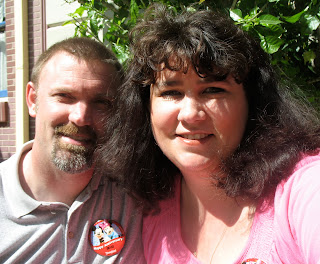 One of the unfortunate things about where our anniversary falls on the calendar is that every year it falls right in the midst of Spring Break. So the parks were very crowded today, lines were long, and there were lots of people just stopping in the middle of the walkways (you know, special people). We rode Pirates of the Caribbean, which was nice because it's been a long, long time since we've ridden it together, one of us usually has to sit out with Rachel. And we walked Disneyland and then over to California Adventure where we visited Blue Sky Cellar and got up to date on all the construction and additions coming to the park.

Steven still had his Fun Card (last years' Disney promotion, where you in to DL for free on your birthday, or passholders got a Fun Card for the amount of the cost of a one day ticket) and he bought me this Precious Moments Figurine. Precious Moments has a TON of DIsney themed figurines now, but this one is one of my favorites, the couple is sharing a Mickey Mouse Premium Ice Cream Bar. It's been one of our favorites for years.

We finished off our special day with a nice dinner a Newport Beach rib joint.

It's been a great few days away celebrating our anniversary, however all good things must come to an end, and therefore tomorrow we'll be heading for home and picking up our girls from their Gramie.
at March 23, 2010

Sounds like you had a nice time. I'm happy for you!

Our anniversary is always during peak time too (August), so it's kind of a bummer. I didn't think about it when we chose the date, but if I had it to do over, I'd pick October, I think. LOL.

Happy Anniversary. That sounds like a nice couple of days.