Upon driving into our cul de sac last Wednesday night coming home from Bible Study, we noticed something odd about our trash cans that were already out for pick up the next morning.

Our trash cans were pulled up on the sidewalk, and one of our green cans was missing. It's not uncommon to find our trashcans moved up on the curb as the kids will sometimes play basketball in the street, or people visiting the neighbors next door will pull the cans up on the curb so that they can park on the street. But as we looked around our street, our trash can was gone!

There was some debris in the street, but it was really dark out and we couldn't make out what it was. We kinda thought it was the palm frowns that we'd put in the green trash cans. But we soon gave up on trying to figure out the mystery and came inside.

As I was putting my purse away, taking my phone out to plug in and charge, I noticed that I not only missed a call from our neighbor, but a text message as well! My phone had been silenced as to not disrupt the Bible Study and I hadn't turned it back to normal so I missed both of her forms of communicating to me. Her text message said that someone had fired up our trashcan and she was calling the fire department!

That's what that debris in the street was! It was our trashcan! I grabbed our industrial strength flash light and went to take a look. And sure enough, there were the remains of our green trashcan that could not be accounted for.

After calling our neighbor back and talking to the other neighbor across the street, we learned that someone had tossed something into our trash and that it's not the first time it's happened according the firemen that were called to the scene. Apparently there are some hoodlums running amuck in the area and this wasn't the first trash can to go up in flames. I felt a little better knowing this action wasn't directed specifically at us. LOL.

The next morning, Steven went out to clean up the mess and to get it in the trashcans before the trash truck came. What a mess it was! I was surprised at how little of our trash can was left. 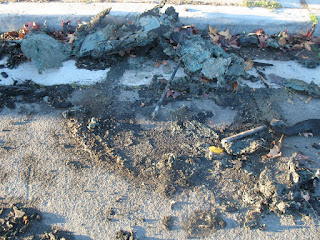 The green trash can pictured here was sitting beside the green can that was set afire. That's a whole lot of plastic to burn up! So we're short a yard waste trash can now. I haven't called the city to get a new one. No need to really. It was an extra one that we weren't paying for, but came in handy for those one or two times a year we had a lot of yard waste, like the dead palm tree trimmings!
at January 20, 2010