Yeah, so the forecasters weren't far off on predicting 2:00 to be heavy rain with lightening! My mom and I were out running some errands and at 1:00 it started raining, and raining, and raining. Getting heavier. Windier. Darker. We were on the freeway coming home and the windshield wipers could not clear the windshield fast enough, they simply wouldn't go any faster.

Thankfully, everyone on the road was driving cautiously and slow. Californians don't know how to drive when it's dry, let alone when it's raining, and has been for two days with more on its way!!!

A friend called and told me there were flash flood warnings in the city my parents live in/where the girls school is. And boy, you should have seen the streets. Flooded. Inches and inches of water everywhere. Trash cans (it was trash day) carried off from their places of origin, down streets and into intersections.

Arriving to the back of the school where I pick Hannah up showed how hard the school had been hit with rain. The field was flooded and looked like one giant puddle. Thankfully, there was a bit of a lull to the storm and it was only slightly raining once the bell rang for schools dismissal. But this was how the sky looked. This is how dark it was. 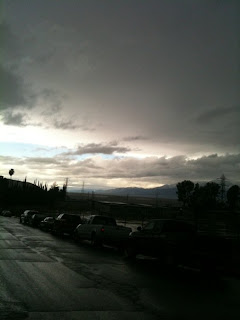 Pulling out of the neighborhood of the school, we noticed piles and piles of white stuff along the yards. It was hail! It had rained so hard that it hailed. And it was so cold that it was still scattered about in yards, on sidewalks, etc. Here are just a couple shots of the hail piles. 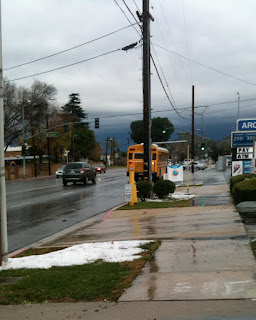 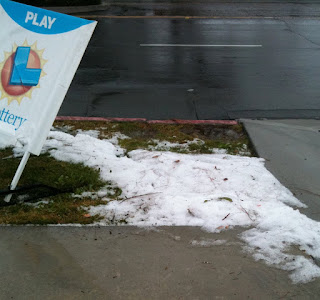 Driving down my parents street the gutters were still a few feet wide with the rain water, and just as we had suspected, one of their trashcans was wiped away and down in front of the neighbors yard, caught partially on a parked car. It had to be retrieved before it drifted any further. I ended up just taking off my tennis shoes and hopping what water I could to get their trash can. LOL. I got plenty wet, but the trash can now safely sits in the backyard where it belongs. 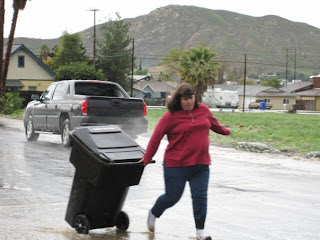 Heading home on side streets, we went past a local ball field and had to make a U-Turn into the parking lot so we could get this picture. The park was completely covered in water. Guess there'll be no ball playing there this week! 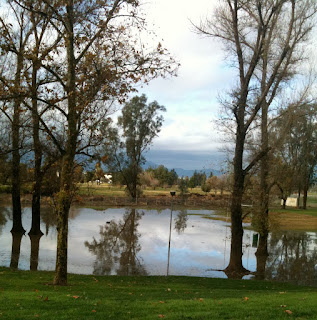 The rain had stopped for the time being. We got home safely. Steven said it rained pretty hard and the wind blew pretty hard here at home this afternoon as well. We've learned of a couple of the neighbors trees being taken out with the wind. We're preparing for another storm to hit tonight or maybe tomorrow. We need the rain desperately, so despite the problems the rain may cause, it is welcomed.
at January 19, 2010