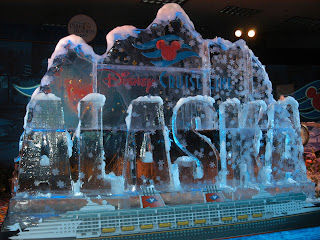 It's a vacation dream of mine to someday go on a Disney Cruise. It's also a dream of both mine and Steven's to someday take a cruise to Alaska.

Well, a couple of weeks ago, the Disney Cruise Line announced their itinerary for 2011. They will be repositioning one of their East Coast ships on the West Coast for the year doing cruises to the Mexican Riviera and to ALASKA!!! That right there would be a dream vacation - a Disney Cruise to Alaska!!!

2011 happens to be the year of our 15th wedding anniversary!! How awesome would it be to try and make this work out?!?! It's an anniversary trip I'd most definitely take the girls with us. We'd all have a blast.

Time to start thinking of how to make this happen... Donations gladly accepted. LOL.
at October 07, 2009

How fun. I hope that everything works out. What a great way to celebrate your 15th wedding anniversary.

Yes, Ed and I would LOVE to take an Alaskan cruise too! I have been entering every contest I can find hoping to win a Disney cruise, so I hope there will be some of these too.

I have been to Alaska but would like to do it cruise style some day with Dale, and maybe the kids if they are lucky enough. :)