Dancing With The Stars

Wow. Wow. Wow. What an amazing time we had last night at the live taping of Dancing With the Stars. I still can't believe we were there.

My sister-in-law woke up yesterday morning to two sick girlies, so she wasn't able to go with us. I wasn't about to try to find someone to go on such notice, so it was me, my Mom, and my friend Cathleen that went and we had a blast! The dress code was to dress semi formal/dress to impress and in my opinion, all three of us looked great! 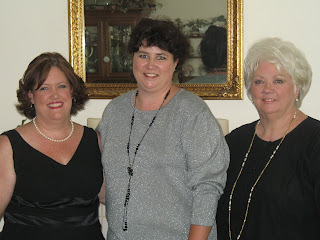 We needed to be to the studios by 3:30, so we left here at 1:30, and arrived to the studios by 2:45. Thankfully, I'd gained some insider scoop from a friend who'd been to a taping two weeks ago and I was able to score a parking spot right in the studio lot due to having a handicapped placard. If it weren't for that, we'd have had to walk BLOCKS from The Grove Parking Structure. Not exactly something that was going to be enjoyable in the heat and in our dress shoes! LOL.

We lined up on the sidewalk along Beverly Blvd, and then in groups were taken the patio seating area where we waited until 4:40, just minutes away from the Live broadcast. Once we were taken inside the set, it was amazing. Amazing. A lot smaller than I envisioned. We were seated in the last row of the balcony above the judges and at times it was hard to see some of the dances, and it was very difficult hearing the judges, Tom, and Samantha talk, but that's why you watch it all again on Tivo! :)

Where we were seated, we could see right down a staircase into the backstage area. We saw all the dancers and celebrities walking about, hanging out, getting last minute primping and having the sweat wiped from their necks and brows after they'd danced. It was awesome to see that stuff, or at least I really enjoyed it! LOL. Before the show, those of us sitting right there were waving to Professional Dancer Tony Dovolani and before we knew it, he came running up the steps and greeted us and high-fived us. That was awesome! As handsome as he is on TV, he's much more handsome in person, and up close! LOL. And it is true what they say about the camera adding ten pounds. Those people were S-K-I-N-N=Y!!! A lot skinnier than they look on television!

Last night's show was only an hour. Which is good. The seats were folding chairs and extremely small in size. It was hot and there's no way I think I could have lasted through two hours, like tonight's finale. For anyone who's ever gone to television tapings of any kind, knows that there is a warm up person who keeps the audience entertained during the commercial breaks with annoying and repetitive stupid jokes, and gets you energized and clapping when coming back from a commercial. I don't think we could have stand to have listened to him for two hours either.

It was so much fun to see the stars who came out to support the remaining dancers. Stars who'd been on the show in previous seasons, a few who got eliminated earlier this season. We saw Jane Seymour and her husband Stacey Keach, Monique Coleman (Taylor McKessie from High School Musical), Vivica A. Fox, Emmitt Smith, Leeza Gibbons, Steve Wozinak aka The Dancing Ewok in my book. Along with Shawn Johnson's parents, Gilles Marini wife and little boy, who really aren't stars, but still you knew who they were and it was neat to see them in person supporting their loved one.

We were not allowed to bring any cameras into the studio, including cell phones. So I don't have any pictures to share of our evening except for this one of the building. Dancing With The Stars is an ABC show, but it tapes at the CBS studios. Weird. 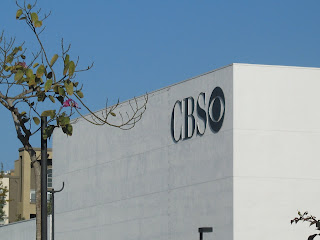 After the taping of the show and taking a little bit of a tour of Hollywood, we made our way back onto the freeway towards home, stopping off for a nice dinner at Applebees. I haven't watched the episode on Tivo yet, I'll do that this afternoon. But I had so much fun and would most definitely do it again if given the opportunity to do so!
at May 19, 2009

sounds like you had a wonderful time. That is neat!