Oh. My. Gosh! What an awesome, awesome adventure this afternoon was!

We arrived to the NBC studios to only find a few other people waiting for the outdoor concert. We were given the rundown on the rules and the plan of action. Before we even entered the front doors all cameras and all phones had to be turned off and put away. If at any point after that moment, the security dude saw your stuff out, you were kicked out! There was no messing around, that's for sure. Our purses were checked and we went through a metal detector and then escorted through the back hall of the set of The Tonight Show, which had already started and Jay Leno was in the process of his opening monologue. We were taken to the outdoor stage and there we waited for the next 45 minutes.

There were then eleven in our group and we had the front row! We chatted with the few people around us. Randy's band members were also walking about and just hanging out. His acoustic guitar player who also does the background vocals, Lance Day, came over and chatted a great length of time with us. That was cool. I've now met two of his band members! :)

It was soon nearing time for the concert and during one of the commercial segments, the studio audience inside seeing the taping of the entire show came out to the concert area and filled in behind us. There were a couple hundred people and we were in front and center!

Jay Leno came onstage and he introduced Randy and he sang one song. He was so close, you could have easily have touched him if he'd put his hand out. After the song, Jay came back on stage and they did a few promotion spots that proceeded the eleven o'clock news promoting the show. Then Randy sang his signature song, Forever and Ever, Amen.

The event finished with one of Jay Leno's right hand men doing interviews and asking questions of the Randy Travis fans that appears only on the website. He was passing out Tonight Show merchandise for right answers, I got a Tonight Show ball cap. LOL.

The officials cleared out the stage area pretty quickly and before we knew it, we were back out front where we started. This is the only picture of our Tonight Show experience and it's taken just outside the front doors. 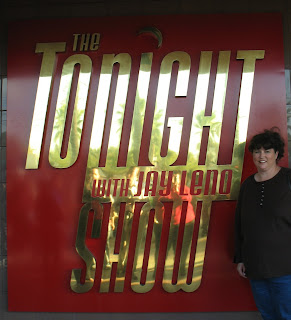 I enjoyed randy's performance via TV and the internet. Loved the RT interview. i was a bit surprised in the fan interview none of the fans seemed to even know what the most current randy travis CD was. i thought that a bit sad if they are truly fans.

I thought the same thing RTFAN!