Happy Anniversary to Us!

We met at the church Singles Retreat in May 1994. Following the retreat, we both attended the weekly ministry and over the weeks and months to follow, we developed a friendship. By the end of the year, or very early hours of the morning of January 1st (we'd gone to Knott's Berry Farm on New Years Eve), we were officially dating. We became engaged on November 1st, and were married four and a half months later. 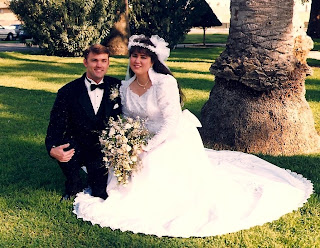 Thirteen years later and with two beautiful daughters, our life together has been blessed in so many ways. I am truly thankful for the Prince Charming the Lord brought into my life.

Happy Anniversary!! Very beautiful picture. It will be 6 years for Dale and I this year. With MANY MANY more to come for both of us.