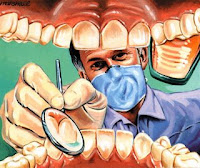 About a year ago, my old dentist told me I would probably have to start having old fillings replaced as the Xrays showed they were starting to decay. In the last six months, I've had this terrible, terrible taste from time to time coming from my upper teeth on the left. When I had my dental cleaning about three weeks ago, I asked the hygienist if old fillings could go back and need to replaced and she said they could and in fact was having pieces of my old fillings chip away as she was cleaning. After having the dentist check it out, it was determined I needed four fillings replaced on that side.

Therefore, I had a dental appointment this morning to replace the 15+ year old fillings.

I was feeling pretty good about my appointment. Very little anxiety about going. I was kinda glad to be getting it done and have that taste be gone and know things were 'good' in that area.

Upon going to the chair, the dental assistant asked if I'd like an iPod to listen to while they worked on me! That was so totally cool to me, especially because I meant to bring mine, but ran out of the house and forgot it. Much to my surprise, there was even music on it that I liked! I put one ear bud in, and left the other ear to listen and be available to answer Dr Stilson's questions, etc.

Overall the appointment went really, really well. That was the longest I've had work done at one time. There was a point, when all the drilling had been done, and two fillings were already replaced, that anxiety set in...

My neck was sore, there were no arm rests, therefore my arms were tired, and there was simply too much in my space - the iPod ear bug, the protective glasses, all the instruments in my mouth, etc.

The very moment they were taking an instrument out of my mouth, I asked to sit up for just a few minutes. It went downhill from there, I gagged and started throwing up. Too much information, I know. But praise the Lord, I was able to pull it all together and only by His grace was I able to lay back down in the chair and finish what had been started. I had no further problems.

It's taken several hours for the novocaine to finally wear off and I've stopped feeling like a stroke patient would with a drooping mouth and slurred speech. I'm glad to have today behind me. And I'm also really glad for the new dental office I've found!
at February 11, 2009

Oh the anxiety just reading your post. I am glad you were able to get it all done and that overall it was a pleasant experience. I had to cancel my appointment last week because Dale got called into work - long story but his second man had been arrested on VERY serious charges and won't see the light of day for a long time. Going to try the appointment thing again next week. NEED to get it taken care of even though it isn't bothering me at this moment

Oh honey! I'm glad it's over too! I know how much you hate going to the dentist, so I'm glad you're doing OK!