Christmas has come and gone and now that's left is the task of finding new homes for all the gifts we got, and then the task of taking down and putting away of Christmas. Christmas 2008 is now behind us.

Because we were going to the Christmas Eve service at our church, we would be missing out on dinner at my Grandmother's. And because of that, we thought it best to grab something before church. So we went to our favorite little Mexican fast food across the street from where our church meets and it was nice.

The Christmas Eve church service was really nice and our Pastor managed to keep it at an hours length. Once church was finished, it didn't take long for the place to clear out as people had places to go, people to see, and we were one of those.

Christmas Eve at Grandma's was different this year, especially since we weren't there for dinner. And we didn't stay as late as we have in past years. We had some things to do in preparation for Christmas morning. This is how our tree looked just prior to going to bed on Christmas Eve. 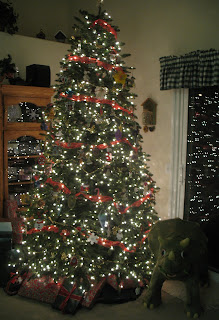 Christmas Day was one of the best ones I remember having in recent years.

We had a couple of hours to ourselves for opening stockings and the girls opening the presents we'd gotten them. We had some good laughs over Rachel's new dinosaur. It was around 9:30 that our family started showing up. Steven's Dad even made a trip down the hill to give us Christmas presents, although not staying long as he was sick and going back home to bed. But Gramma and Papa, Uncle Bart, Uncle Robbie and Auntie, and McKenzie, and Haylee were here for the day and and all it held.

We opened presents, played our new Wii game, Wii Music, and had a nice dinner. Unfortunately, I wasn't feeling well, and the dishes and clean up were left to Steven and to my Mom. Thank You! Once some motrin kicked in, I was good to go.

We woke to clouds and drizzle and several times throughout the day it rained pretty steadily. It was a welcomed change to our usual Southern California Christmas of being in the high 70's, some years even in the 80's. At one point in the afternoon, we discovered a rainbow! What a gift that was on Christmas Day! 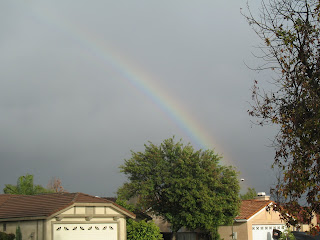 Late afternoon, we had more family and friends make their way to our home. An Aunt stopped by for an hour, a cousin came and stayed late into the evening, and then our good friends, Keith and Amy and two of their kids joined us as well. The evening was spent playing games. The boys were playing Guitar Hero in the family room and miscellaneous games were being played on the dinning room table. We had a such a great time and ended up playing games until just minutes before midnight!!! We'd literally been partying all day long. It was awesome.

When our last guests left, we put the girls to bed (because they managed to stay awake all night), turned off the lights, and fell into bed, leaving the mess of the day to be dealt with and cleaned up the next morning. Thank you to our family and friends for making Christmas a great one and one filled with memories.
at December 26, 2008

Darcy your Christmas sounded perfect. I sure enjoyed the rain on Christmas it just seemed to make everything a little more cozy. I am just sad that it is over already.

We noticed the rainbow here at our house as well. I thought it was perfect instead of the feet of snow in other states.... a simple rainbow with a little rain. Sounds like you all had a marvelous Christmas.

A friend of mine in Arizona posted pics of (I think) that same rainbow. It was the full arch of a rainbow, not just a piece of it like you saw. It stretched wayyyy big across the sky. How beautiful!!