Last week, when the girls and I were at Disneyland, we were in Town Square during the time in which the anthem is played and the American Flag is taken down for the night.

Looking around, the majority of people stopped in their tracks to watch and pay tribute, many putting their right hands over their hearts during the playing of our anthem. After the flag had been taken off it's pole, Hannah wanted to go and see them fold the flag, so we went closer to watch.

There are rules as to how to deal with the American flag - white gloves, folded just so, never dropped on the ground, but it's always done with such reverence and respect. It's always something to watch. 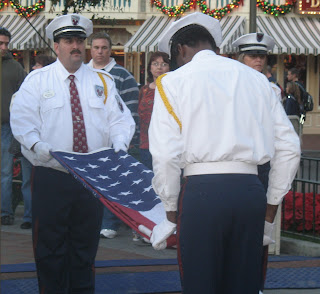 Now take a look at how the California flag is treated... 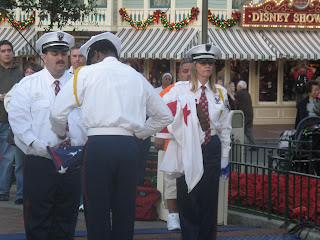 While the lady is still standing at attention, look at how our flag is all balled up and just draped over her arms. LOL. Makes ya wonder why States don't have rules about how to treat the State flag.
at December 11, 2008

LOL...that's funny. I guess it's really kind of sad, but it made me laugh today!

I agree....funny, and sad and it gave me a chuckle last week when I witnessed it.