Growing up, my Mom hosted an ornament party the first Monday night of every December. I remember some years my Dad would take me and my brother out, where, I can't remember, but what I remember was coming home and looking through the ornaments my Mom had received. Some of the ornaments were breathtaking.

When Hannah was a baby, I participated in an ornament party with friends, and I did it for a few years, but over time, the night of the party always fell on a day I couldn't make it, and it had gotten away from ornaments, and more and more people were doing Christmas 'crafts'. So I opted out of that group.

Early in October, I was asked by one of the ladies at the church to become part of her yearly Christmas ornament exchange. Not only was I excited about the possibility of getting some new homemade ornaments, but also excited about the other women whom she's invited to have be a part of the exchange as well. I think judging on who's she's invited, we're going to have some great ornaments this year!

I finished my ornaments the end of last week. Yea Me! They are done and in a basket and ready to go, and the party isn't even until December 7th. I spotted these in a catalog a few years ago and have been wanting to make them, but just haven't. Once I was invited to the ornament exchange, I knew that these were the ornaments I wanted to make! I love the traditional red and green colors of Christmas and this ornament uses just those colors. I can't wait to see what others have made! 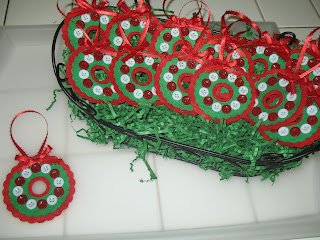