Sarah Palin is Coming to 'Town'

Years past, I have had absolutely no interest in the election stuff, coverage, debates, conventions, etc. I'd find something else to do, read, blog, surf about on the internet. Politics are Steven's expertise and he's very good about keeping up to speed with all thats going on in the world of politics. And I respect and honor his opinions as to who we should vote for.

But this year, it's different for me, I'm actually interested. And I think it's because a woman is in the running. I don't hold feminist ideals or any of that, I just really think it's cool that a woman, who holds the same values and morals as us is in the running. This year, I have watched the election stuff and coverage, and the Republican Convention when it was on last month. And I even have the vice presidential debates tonight set up on Tivo. I may even watch it without Steven :::Gasp!:::Although probably not cause I LOVE to hear his commentary when the 'other side' is speaking.LOL. 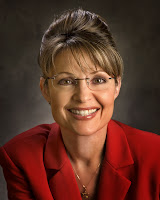 "Good Luck Sarah! We're Rooting for you!"
Imagine my excitement when Steven said a Southern California appearance has been scheduled for Sarah Palin! However, I was bummed when he told me she was coming this Saturday. The Saturday we've been planning on attending an air show for well over eight months.

What an opportunity it would be to go and see her and hear her speak in person. And the thought has crossed our minds to skip the air show and go hear her speak, but there is no guarantee you'd even get in to the center where she'll be. So as of today, our plan is to still go to our air show, and hope that another Southern California appearance is scheduled.
at October 02, 2008