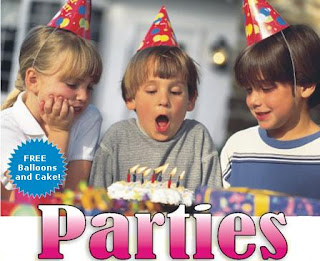 This last weekend, while lounging about on the couch, recovering from having been out so late Friday Night (LOL), I came across the coolest television show that was right up my alley.

It was on the Fine Living Network and the show was called Cool Kid's Parties. It's a thirty-minute show whereas the host comes in and helps a mom create a cool and well themed party. See, right up my alley for those of you who know how I love to do my girls' birthday parties.

There were a few episodes in a row and they were all good with some great ideas. And it got me thinking about the parties I've thrown for my girls over the years. The most recent blow out party was this past April, for Hannah's 8th birthday, when I did a tea party . That was a lot of fun and I was very happy with how the table and party turned out.

The show also got me thinking about all the parties I've done.

Last year, Hannah had a High School Musical Party. In 2006, her birthday celebration was simple with dinner and cake with the family. In 2005, we did a flower and garden party, 2004 was the backyard carnival that got moved indoors due to rain. Rain is something we've had to deal with a times for Hannah's birthdays over the years. She's had a Disney princess party, a Minnie Mouse party, and her first birthday was teddy bears.

Rachel has had a few less birthday parties to reminisce about. Her first birthday was a Rubber Ducky theme, her second birthday was Finding Nemo, her third birthday, was supposed to be a Doodlebops party, but her party had to be cancelled due to Daddy being sick, so it ended up being a very simple celebration. This years' party is going to be a water party! There will be lots of water and tons of fun and she's very excited!

I love thinking and planning out parties and it was fun to find a television show that showcased someone else doing the same.
at August 20, 2008