Getting Married the "Right Way"

In the last couple of weeks, there's been some postings on Facebook from people about their impending marriage.

For days leading up to their special day, the bride posted about how excited she was for the big day, how she couldn't wait to spend the rest of her life waking up beside her soon to be husband, and other statements like that. One bride put as her status the morning of her wedding that she felt like a kid on Christmas morning.

Those are all very touching and meaninigful statements when you're embarking on the adventure of marriage. I know I said the same statements. However, in my opinion, those statements loose something when you've already been shacking up and already sleeping together. Really, what's changing, beside the fact that you'll now have his name, and have made a life long commitment to one another (which in this day and age, sadly, we know for a lot of people isn't really true). You're already living with each other, already having sex, already waking up to the man. Not much is going to be different, aside from the titles and such.

Steven and I were both excited to get married. Our lives, once we said those vows, were forever changed. I had still been living at home, with my parents and brother,  it was AFTER we were married that I moved in to Steven's condo. We hadn't already been sleeping together, we were saving that until AFTER we were married. There was so much for us to be excited about. 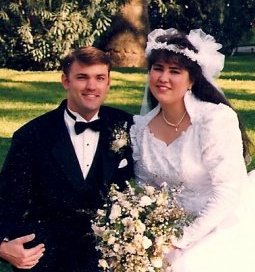 Over the weekend, we were sitting and chatting, and I was telling him about my Facebook friends and their statements and how it made no sense to me, he told me about this article, Getting Married the Right Way and it hit the nail on the head, it was a really great article for those of us who've gotten married the "Right Way."

I like Crowder, but I didn't know he got married. Thanks for sharing this article!

PS I shared the Crowder article with both our youth leaders and college leaders. :)