For most of my life, I've always had long, long hair. But at the beginning of summer, two years ago, I had ten inches taken off and I donated my hair to Pantene Beautiful Lengths.

I donated my hair on behalf of three women. My longtime friend Diana, diagnosed with lung cancer in the summer of 2008 and went home to be with the Lord in January 2010, and for the sister-in-laws of my friend Amy, both who had been diagnosed with breast cancer earlier that year.

You can read about it and see the before and after pictures on the post I wrote "Taking a Load Off".

Who would ever have thought that as my friend Trudi cut my hair that warm summer evening, that less than two years later she too would be diagnosed with breast cancer.

She told her story of how one weekend morning, as she rolled over in bed, she found two lumps and how she put off going to the doctor until weeks later when she couldn't lift her arm up to get something high out of the cupboard without pain.

She told of the day she and her husband were told that the biopsy revealed, "it's Breast Cancer".

She told of how she thought that having only 9 of the 31 lymph nodes testing positive for cancer was a relatively positive thing, while her doctor thought otherwise and upgraded her to Stage 3.

She told of the two rounds of chemo. The effects of loosing her hair. The five weeks of radiation, five days a week.

She told of the booth at opening day of our local town soccer club. They were taking pledges for an upcoming walk for Breast Cancer. Trudi signed up to walk. A year ago, breast cancer awareness wasn't as close a topic as it had become in the last nine months.

I'll never forget the morning she told me. It was at school, kids were running about on the blacktop, waiting for the bell to ring to begin their school day. She wanted to be the one to tell me before I heard it from anyone else. Her news hit me hard.

I've known people who knew people diagnosed with breast cancer, or so and so's Mom, or the friend of so and so. Or so and so. But never had I had a friend who'd been diagnosed with breast cancer. Now I personally KNEW someone who had breast cancer. She's my age (a couple years older, but close enough). She had two kids the same ages as our girls. I remember calling my mom once I got in the car and tearing up upon telling her. Trudi's cancer has touched many a hearts.

This is Trudi with her eight year old daughter. 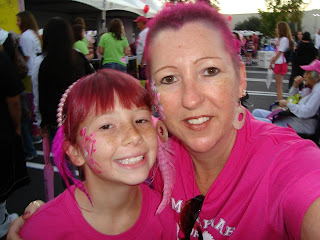 Trudi is a Breast Cancer Thriver. The last eleven months have been horrible ones. Filled with doctor appointments, Chemo appointments, radiation appointments. But she's alive. She's thriving. And she's an inspiration to many....
at October 29, 2011