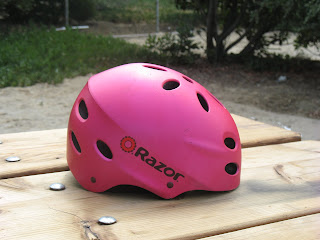 We've always been a family that pushes the wearing of helmets. The girls wear them when they ride their bikes, their scooters, and I've even made them wear their helmets when we've been the local skating rink.

When my brother was 14 years old, back when helmets weren't a law, he had a skateboarding accident. His skateboard hit a rock and he landed on his head, resulting in a basal skull fracture. He survived and didn't suffer any long term brain damage. Although he did loose some capacity to smell and taste as a result.

So helmets aren't ever not an option in our family.

What happened on July 20 of this year only confirmed the importance of helmets.

Hannah was in an accident on her bike which resulted in her being transported via ambulance out of the campground to the local trauma hospital whereas she was diagnosed with a pretty bad concussion. To read all the details, visit the post on her blog.

Her concussion was pretty bad and she had a helmet on! Had she not been wearing a helmet, the outcome would have been a lot different than it was. After a few hours of repeating herself and asking the same questions over and over and over again, she was practically back to herself by the time we were discharged from the ER shortly after midnight. Had she not been wearing her helmet, she might have ended up with a much more severe head injury.

It's for those of you who don't enforce your kids wearing helmets. This post is to hopefully to get you to change your thoughts and views on helmets. And start making your bike riding, scooter riding, four wheeling kids to wear helmets! Helmets can save lives!
at September 07, 2011