I've got so much going on in the next few weeks that the other day, I was feeling a little overwhelmed. I knew it'd all work out and get accomplished, I just had to sit down, make some lists, and tackle some of the tasks one thing at a time.

The girls' school is having a Walk-a-Thon tomorrow. The PTA is hoping we bring in enough money that this will be the only big fundraiser we'll have to do this year. It's the PTA that supplies the monies for a lot of the things that our State budget has cut, so it's important that we raise funds. A lot of work has gone into tomorrow's event. There will be grade level booths selling concessions, mom's with squirt bottles squirting kids as they walk by, and prize raffles for pledges and monies brought in. The first graders are collecting the recycling and a week or two ago, Rachel's teacher put me in charge of taking care of it. She'd been away for an entire week at training, and I'm sure was just feeling overwhelmed with it all and just handed it over to me. With the help of some friends, I obtained a huge box from the local TV store and I've covered it in yellow paper and painted it so that it stands out on the playground. I think it will, what do you think?? LOL. 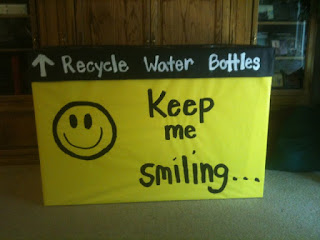 The next thing I have on my plate is the upcoming Harvest Party I'm organizing for the kids of our church. I hadn't gotten much planned on paper and was feeling rather stressed about it. But I had a meeting with the women who'll help me this past Sunday after church, and I'm feeling pretty good about it and now that I've had my meeting, and have delegated things out, I'm feeling less stressed about that.

And finally, as the Box Tops Coordinator for our school, the current contest is winding down and coming to an end on October 21st. Last week, I made a flyer. I then took the flyer and printed, cut, and counted enough flyers to go home with our 700+ students alerting to the upcoming contest ending. I've been working on getting the 17,000 Box Tops I have here at home organized and grouped together to make sending them off to the company in a month a little easier. I'm also responsible for rewarding the contest winners and then presenting the awards in an assembly the end of next month. I'm making some changes to how things have been done in the past and it just takes time and organization.

I will be there tomorrow helping as well. I hope it cools down a bit :)