I realize we are now closer to the next weekend than to the last, but things around here have been a little busy the last day or two. But I wanted to share about our adventures.

This last weekend was a three day weekend and the girls spent the long weekend with their Gramie, Steven's mom. The girls as always had a good time, unfortunately, Rachel came home sick and had to stay home from school yesterday, and today it appears that Hannah is fighting something. In addition to a congested nose, she's complaining her ears are plugged. I sense there could be another trip to our Pediatrician before the weekend if her ears should start hurting.

But anyways, back to our weekend...

On Friday night, we simply stayed home. I tried out a new recipe for dinner (oriental chicken salad) and much to my surprise, Steven liked it! It's not something I would make when the girls are home, so I was happy to have the opportunity to try it out on him. We watched a movie and then reclined to the office - I on my computer, and he on his. :) Ahhh, so romantic, isn't it?!?!

Last Spring, when the new Star Trek movie was released, it was on Steven's list of "To See", but it just didn't work out and we missed it. However, on Friday, the movie was re-released into IMAX for a few weeks. The only theater in our area showing it had a single showing at 10:30pm, and for me, that would literally be paying for a nap! So we found an IMAX theater in Los Angeles that had a middle of the day showing and ventured in L.A. to see Star Trek. Not being a fan of Star Trek, I kinda expected to be bored through the movie, etc. But it was a really good movie! I might actually pay attention to the old episodes of Star Trek from now on when Steven's watching them!

After the movie, we headed over to the Santa Monica Pier. They've recently redone parts of it in anticipation of it's centennial celebration (today, actually 09-09-09). But we decided we really didn't want to pay $10.00 to park, so we drove, and drove, and drove down the coast. We drove through all the little beach towns of Los Angeles County - Hermosa Beach, Manhattan Beach, Redondo Beach, Palos Verdes, and several other little towns we didn't know the names of. We found the Trump International Golf Course that sat on the cliffs of the Pacific Ocean. We found ourselves in neighborhoods of homes that were absolutely breathtaking, leaving us wondering what in the world people did to own such beautiful and large homes with the views they had. 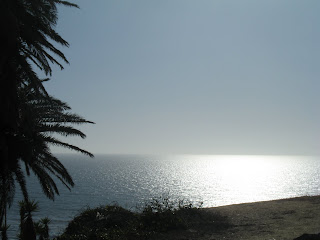 We ended our drive down the coast in San Pedro and had dinner at a Mexican restaurant we've frequented a few times before in Ports of Call. We enjoyed a table on the patio and once again enjoyed a meal with uninterrupted adult conversation. After a nice relaxing dinner at seaside, we hopped on the freeway and headed inland, to home. 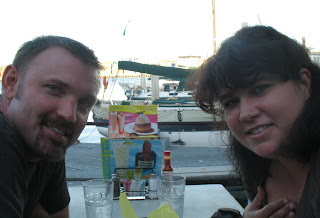 On Sunday, our morning was filled with church. Our usual lunch plans of going to Miguels Jr with two families of friends didn't happen as neither came to church that day. So, once again, we were forced to have a meal out, with uninterrupted adult conversation. Ahhhh, it was such bliss.

Mid afternoon, we had a birthday celebration to attend for a dear friend from church. This little dinner party has been in the works for a month, she chose to meet at Bucca De Peppo's as that was her favorite place to eat. There were seven couples, no kids, and to say the fellowship and food were great would be an understatement. It was unfortunate for the birthday girl that a crown came off just as our dinner was arriving and she could not eat. But aside from not being able to eat at the very place she'd been looking forward to, I know she enjoyed the time spent with friends. With a stop at The Cheesecake Factory for some cheesecake to take home, it was a perfect way to end a great afternoon!

Monday didn't hold much. I got my haircut (i"m loving this shorter length since cutting 10+ inches off and donating). And then we just hung out at home - each on our own computers as we waited for the girls to return home. And then when they returned home, it was time for doing their laundry, unpacking, and getting focused for starting the new week. It was a nice, relaxing weekend and I was thankful for it...
at September 09, 2009