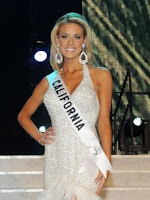 I don't know how many people know about the recent happenings in the pageant world. But on April 19th, at the Miss USA pageant, when asked by one of the judges how she would define marriage, Miss California stood up for her beliefs and said that she believed marriage should be between a man and a woman.

That statement caused a huge uproar and her Miss California Crown was sought out to be taken away.

Way to go Miss California for standing up for what you believe and for being the voice of many Californians. And way to go Mr. Trump for allowing her to keep her crown!
at May 12, 2009