Land of The Lost 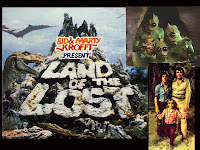 I LOVED this show as a kid. Absolutely LOVED it! And it's been years since I've seen any episodes.

I had been looking forward to the release of the upcoming movie at the theaters next month until I saw a trailer and realized that Will Ferrill is in the movie and it pretty much looks stupid.

Imagine my excitement on Monday afternoon while I was surfing about the internet on Steven's iPhone on the way home from camping and discovered that the Sci Fi channel was doing a Land of the Lost Memorial Day Marathon! Praise the Lord for technology because I was able to set our TiVo to record enough episodes until I got home to set up a season pass to tape every single one that would be airing. Our TiVo taped over 20 episodes on Monday and there's still more to record in the coming days.

The funny thing is, is now that I am an adult, that show is the cheesiest show! The graphics and stage sets are all very, primitive. Of course they were taped over 30 years ago and technology and film has come A LONG way over the years, but it's funny to watch it now and see just how bad it was when as a kid it was the absolute coolest!

Hannah and Rachel have enjoyed watching them and really like the show. And I have to admit, it's a nice break from the usual afternoon TV shows they watch, every single day of the week. LOL.
at May 28, 2009

I loved that show too.

I heard a lot of people saying that last Monday--that it looked so cheesy & fake now that they were watching it as adults. I loved it, too!