This morning, the girls and I attended the ground breaking ceremony for the new local high school.

This new high school is being built in the community in which I grew up in, where my parents still live to this day. For many, many years our community was promised a high school. There was a time in which there was the thought it would be built in time for me and all the other kids in our community to go to. It never happened. I've been out of high school seventeen years this year, so that tells you how long the community has been waiting.

This high school is going to be NICE! All state of the art classrooms and equipment, etc. It's supposed to be a technology magnet school, which means if our current school district continues to grant our inter district transfers every school year, Hannah will hopefully attend this school as a freshman in 2014.

It's unfortunate, but alongside of all the excitement of finally having a high school of 'our' own, there is some controversy that has come about. The controversy is not over building the school, not the location, but the name of the school.

At this mornings ground breaking ceremony, there were many, many signs and t-shirts displaying the desire for the name change. Some signs even calling for the recall of the elected school board members who voted against what the people wanted. 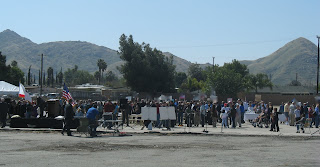 Hopefully voices will be heard. The names on petitions will be accounted for, and the name of the school will be changed to what it should be, after the community in which it will stand.


*** When/if leaving comments, if you wish for your comments to appear, please refrain from being specific on the name of the community and high school in which I am referring to. While my general location might be able to be narrowed down, I try to avoid being specific with our school and community names when posting on all my blogs. Thanks! ***
at April 04, 2009

Well, if they are breaking ground now then there is hope that it will be ready in time for Hannah to go there. They seem to take YEARS and YEARS to finish them with the whole funding issues.

The school is slated to open for the 2011 school year!

It is very sad isn't it. Thanks for the pictures. I wasn't there because we were on vacation.