We took the girls to the park around the corner from our house last night after dinner to feed the ducks. It's a beautiful park with a large lake and nice playgrounds and lots of big beautiful tress. We don't go there very often though. Sometimes there's just too weird of people hanging about.

We found the ducks and geese in their usual hangout area. And as soon as the message was sent through the 'duck squad', more and more ducks and geese made their way to where we were. Including these two: 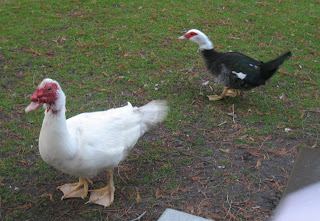 We've seen these two before, how can you miss them? We were watching them last night and they did this thing with their neck that makes you think they are a chicken. But they have webbed feet.

LOL on the chucks or dickens. I have seen some like that before and they weird me out. Have no clue what they are. The one at our park is super aggressive and you can't turn your back on it. Scary fellow. Have a blessed weekend.

lolol--I'd go with "Dickens", just because that one cracks me up!

Ironically, we went to eat w/ my parents last night at a restaurant on Lake Stryker and there were 2 duck/goose-like animals that looks like these there. My dad had a name for them, but I can't think of what it was. I'll ask!

Oh my gosh Liz, really??? Yes, please ask your Dad and then let me know what they are really called. LOL.