I had to stop and get gas the other day in Orange County on the way home from Disneyland. Finally, I got to pay under $3.00 a gallon for gas...just barely though. 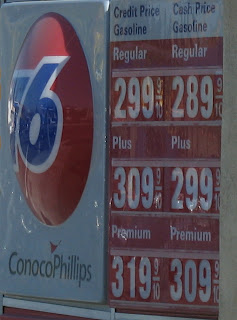 Later that evening, as we were out and about, I noticed the price of gas had significantly dropped during the course of the day. One gas station had gone from $3.01 when I took Hannah to school, to $2.89 less than 10 hours later! Another gas station we passed had dropped .10 cents that day! When I filled up the van, I was jumping for joy 'it only' cost $55 to fill the tank!! At one point during the summer, the gas pump shut off after $90!!

Thank the Lord the prices are finally coming down. Let's hope they continue to do so!
at October 31, 2008