A Donut Out of This World

As good as donuts taste going down, in recent years the taste has starting sticking with me the rest of the day. LOL. So I don't really get excited about donuts anymore, that is until this last July when we went camping.

All the friends we were, with had worked it in to their menus for a trip to the donut store across the street from the campground. I hadn't planned on eating any, because after all, I don't really care for donuts...that is until I had a cream filled donut.

The cream filling inside wasn't just any filling, it was a frosting cream filling. I fell in love with the donut at first consumption! When I learned some of our other friends were going to the donut store later in the morning, I requested another. Sadly, they only make these donuts on the weekends and sell out rather quickly. So I only got one of these divine donuts in July.

When we started planning this last weekends' camping trip, I got excited about the possibility of getting another one of those special donuts. Steven and the girls walked to the donut store on Saturday morning, and brought me two donuts. I took my time over the course of the morning and savored each and every bite. 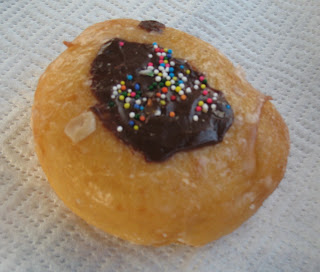 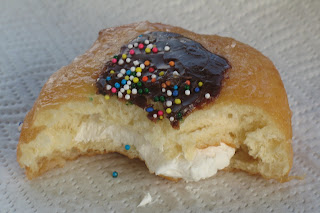 Later Saturday afternoon, one of our friends told me that he had arrangements with the donut store people to come back that night just prior to closing when they would be making their fresh cream filled donuts for early Sunday morning and that they'd save him at least two, give him more if he wanted. So, he went back that evening and brought me two more donuts. Despite feeling the warmth coming through the box, I put the donuts in our tent and kept them. I ate one Sunday night, after we'd gotten home, unpacked the car, took a shower, and settled in for watching some television. That donut was the perfect ending to a perfect weekend! The other donut I ate the next night, while it was still oh so yummy, it wasn't as good as the night before.

And now, I have a favored donut that I can look forward to the next time we go camping at San Elijo!
at October 17, 2008